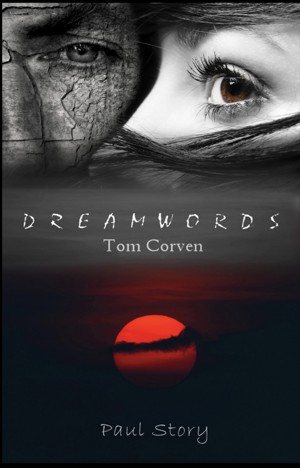 By Paul Story
An amnesiac boy awakes in the wilderness with blood on his hands. Rescued by a man and his beautiful companion, the three are soon trapped in a remote cottage by a storm.

Plagued by visions of the past and the dead, the boy uncovers his memories - memories of a time too old to be his. And when the brutality of the past is upon them, the terror in his head becomes more than his own private hell. More
Part of the Dreamwords Series, you can enter the mystery with Tom Corven or The Journal.

A boy awakes in the wilderness. He has blood on his hands from events he cannot recall. Half dead, he stumbles on a remote cottage and is rescued by a man and his beautiful young companion. Following an accident, the three are trapped in the cottage by a storm where it becomes clear that the relationship between his rescuers does not match their story. But the boy has his own problems. Plagued by visions of the past and the dead, he begins to uncover his memories - memories of a time too old to be his.

And, as that sad age reaches out to infect their lives, the brutal treatment by a father who lived a hundred and fifty years ago becomes more than the cruel memory it appears to be. In another time, a son and a daughter feared the sound of his step - and a mother for the lives of them all. And when the brutality of the past is upon them, the terror in his head becomes more than his own private hell.

I've never liked doing as I am told, and yet somehow I managed to conform long enough to become boring and dissatisfied with the route I was on. In what some might call a mid-life crisis (better described as waking up and exclaiming 'Doh') I resigned a 21-year career - I was going to live a creative life if it killed me. Determined not to lose my freedom by conforming again, I dumped everything but three bags. I no longer had a car, a home or regular bills. I did have a good credit rating, an abundance of common sense that I had to trample on and a tiny income that would put me on the poor list if I cared to apply. I also had a love for the hills, a good education, an interest in science and technology and a bloody-mindedness that could have choked a salmon climbing the falls at Niagara.

Once an unpaid volunteer in the mountain rescue service in the Highlands of Scotland, I am now well past my sell-by date. But, for a few years at least, I was certain that I could survive in the wilds - in touch with the world and productive through modern technology. In the depth of winter, I travelled - sometimes abroad, sometimes at home - staying with friends and family, house-sitting or renting inexpensive apartments.

And so, one novel followed another as I honed my skills and began to work on an idea that would grow to become Dreamwords. I was in this for the stretch. I loved it, lived it, walked with my characters, lived in their heads and breathed the same air.

Living this writing adventure and free to take risks, I created Tom Corven - the first novel written for podcasting. After lots of backslapping and feel-good feedback, it was time to see if I could make it back into the normal world again. Backed by fans of TC, family and friends, I sold shares in the series built around Tom Corven - The Dreamwords Series.

With Book Two complete, it was time to put up or shut up. This is the problem when you're so bloody minded and opinionated: Sometimes you've got to do crazy things to prove you're not crazy!

With the help of strategic homelessness, a bunch of wonderful people and cruelty to my credit card, I am about to launch a trade paperback version of the podcast - renamed Dreamwords Book One - in an unusual way. Over the next few weeks and months, I will take £80,000 (approx $120,000 US) worth of dead tree books specifically designed for the purpose, put them on the streets and walk away, trusting that enough people will pay for them to help me launch Book Two.

Did I mention the crazy thing?

You have subscribed to alerts for Paul Story.

You have been added to Paul Story's favorite list.

You can also sign-up to receive email notifications whenever Paul Story releases a new book.