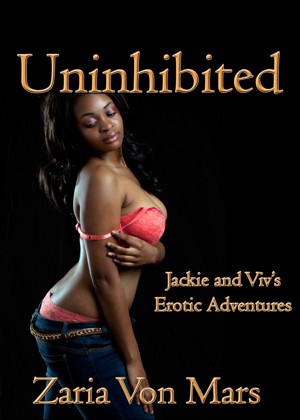 Wow. I like the dangerous element to the story, but the tenderness between Jack and Viv is truly genuine.

i liked it. it explored a lesser known side of sexuality, which I appreciate!

if you're looking for fleshed out characters and full story-lines i wouldn't recommend it, HOWEVER, the sex scenes are amazing, and fantastic, something anyone can appreciate.

There are times when I think that "believability" is over-rated. The earliest stories were tales of gods and monsters and magical beings. These stories still engage us because they connect with us on a sub-rational level.

But in a Zaria Von Mars story that doesn't matter. In fact, the absurdity is a plus because it unchains us from any kind of sense of security we might get from rational terms of reference. Movie stars don't really have secret sex clubs hidden behind the internal walls of department stores. Or do they? LIke when looking at some kind of surrealist painting, we wonder for a moment if it is our own grasp on reality which is faulty.

This is not a book for everyone. Some of it is shocking. There is tender eroticism here, but it is intermixed with scenes of rape and other kinds of brutality and ugliness. If you want an easy book for pleasant titillation, this isn't it, but if you want a roller-coaster ride through the beautiful, the sensual and the hideous, step aboard.

A lot of crazy sex.

You have subscribed to alerts for ZVM.

You can also sign-up to receive email notifications whenever ZVM releases a new book.