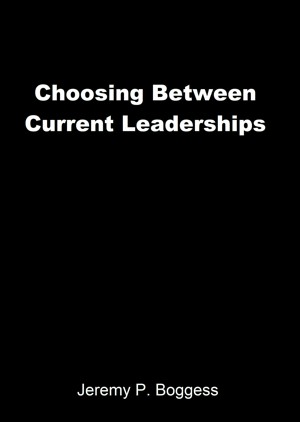 Ever since Jeremy Boggess was a small child, he has felt that there would be a chain of events set in motion and that his task would be to help us all through those changes.

He was born in 1971 in the United States of America, and in 2016 moved to Europe. In the 2000s he ran for the Idaho Senate several times as an independent with a desire to make a positive contribution to the lives of people. In 2008, while running for office, he self-published his first book of philosophical observations, Thoughts & Responsibilities. He graduated from Boise State University and Lewis-Clark State College with business degrees. Additionally, since childhood, he has studied philosophy and sociology because of his concern for the future of humankind.

Reviews of Choosing between Current Leaderships by Jeremy P. Boggess

You have subscribed to Smashwords Alerts new release notifications for Jeremy P. Boggess.

You have been added to Jeremy P. Boggess's favorite list.

You can also sign-up to receive email notifications whenever Jeremy P. Boggess releases a new book.