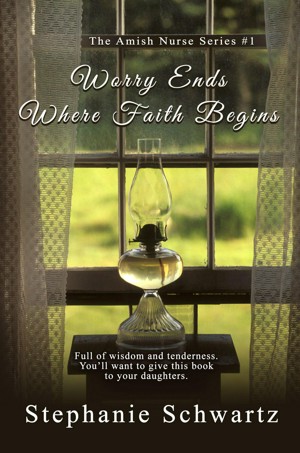 Midwife-turned-author, Stephanie Schwartz seems to swim seamlessly through cultures, religions, superstitions, raw fear and ecstasy to the first breath of a new baby. She invites her readers to join her, taking us on a tour to the innermost workings of another world while giving us a rare, intimate glimpse into her daily life. She has five children scattered around the world, grandchildren, and over a thousand babies she calls her own. After writing three books on birth, and then retiring as a midwife, she realized she had most likely been in more Amish bedrooms—as a midwife—than most other authors of Amish romance novels and began researching the genre. Thanks to the Pandemic she was able to produce the novels in the Amish Nurse Series, hopefully reflecting an authentic glimpse into another world.

Reviews of Worry Ends Where Faith Begins by Stephanie Schwartz

You have subscribed to Smashwords Alerts new release notifications for Stephanie Schwartz.

You have been added to Stephanie Schwartz's favorite list.

You can also sign-up to receive email notifications whenever Stephanie Schwartz releases a new book.