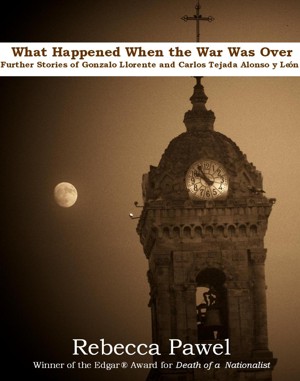 What Happened When the War Was Over; further stories of Gonzalo Llorente and Carlos Tejada Alonso y Leon

By Rebecca Pawel
Rated 4.00/5 based on 1 review
In the novel DEATH OF A NATIONALIST, committed fascist Carlos Tejada Alonso y Leon crosses paths with equally committed socialist Gonzalo Llorente. The meeting changes both men's lives forever. The stories in WHAT HAPPENED WHEN THE WAR WAS OVER trace the lives of Tejada and Gonzalo after General Franco's dictatorship falls, and complete their biographies for curious readers of the Tejada series. More
Four stories, spanning a period of over fifty years, complete the biographies of the two main characters in DEATH OF A NATIONALIST; Carlos Tejada Alonso y Leon, and Gonzalo Llorente.

"The Big Picture"
New York, 1949: Since the death of his love and his dreams in Spain ten years earlier, Gonzalo Llorente has made sure that he cares for nothing. But among the flood of Puerto Rican immigrants to East Harlem, he finds two who threaten to shake him out of his apathy. A strong-willed girl and a needy child make him begin to wonder whether life is worth living, even away from Spain, and without his beloved Viviana.

"Hostages"
Madrid, 1981: Carlos Tejada has spent the last five years living with his wife in quiet retirement, doting on his grandchildren, and shaking his head over the direction of the newly democratic Spain. His friendly political arguments with his oldest grandson take on a new urgency when members of his own Guardia Civil lead a coup d'etat that recalls unpleasant memories of 1936. Tejada must once again choose where his loyalties lie, haunted by the fear that the people he loves most in the world will suffer for his old sins.

"The New World"
San Juan, Puerto Rico, 1983: Carlito is a university student from Madrid, collecting oral histories of the Spanish Civil War for his thesis. During a winter vacation in the Caribbean, he seeks out a Spanish Republican exile who is an acquaintance of his family. When Carlito meets Gonzalo Llorente, he comes face to face with his family's past. Gonzalo, on the other hand, must decide how and what to tell of his own life to the boy who introduces himself as "Carlos Tejada" - and has no idea that his grandfather and namesake was once Gonzalo's greatest enemy.

"The Twenty Four Hour Limit"
Madrid, 2003: "If something does go wrong, try to give us twenty-four hours." The guerrillas who resisted Franco's dictatorship all knew that they had to withstand twenty four hours of torture if captured, to give their comrades a chance to get away. The guardias civiles who questioned them knew it too. In a Spain of cell phones and skyscrapers, where the peseta has given way to the euro, and the dictatorship is a distant memory, few people know about the twenty four hour limit. Carlos Tejada Alonso y Leon still remembers the rules though. And his memories force Aleja Palomino to look beyond the bright lights of the Madrid she loves to the darkness of the past one last time.
Available ebook formats: epub mobi pdf rtf lrf pdb txt html
First 30% Sample: epub mobi (Kindle) lrf more Online Reader
pdb
Price: $1.99 USD
Buy Add to Library Give as a Gift
How gifting works
Create Widget
Tags: spain sequel spanish civil war puerto rico mystery series mystery detective mystery story death of a nationalist carlos tejada alonso y leon fictional character gonzalo llorente fictional character madrid 23f
About Rebecca Pawel

Rebecca Pawel was born and raised in New York City. She grew up traveling between New York and Puerto Rico, and began studying Spanish seriously in high school. A summer spent studying in Madrid cemented a life-long love of Spain, and laid the foundation for a major in Spanish Language and Literature at Columbia University.

Pawel has published four novels set in the immediate aftermath of the Spanish Civil War. These books begin with DEATH OF A NATIONALIST (2003) which won an Edgar® for best first novel by an American author. DEATH OF A NATIONALIST was followed by LAW OF RETURN(2004), THE WATCHER IN THE PINE(2005) and THE SUMMER SNOW, which was listed as one of Publisher’s Weekly’s best mysteries of 2006.

Pawel teaches in a public high school in New York, which at times feels like being a member of the International Brigades, and at times -- given the climate at the Department of Education -- feels like belonging to the Falange. She has written a (still unpublished) novel about the Spanish Empire in Renaissance Flanders, and her writing interests have led her to study French, Dutch, and Catalan, as well as Spanish. In her not very plentiful spare time, she dances, plays the flute, and tries to keep writing more historical novels.

tv clip from "Hostages"
This clip was both the inspiration for the story "Hostages" and part of what Tejada and Elena actually listen to in the story. This is REAL news footage (although the music was added after the event). The images of the Congress were recorded live on February 23, 1981, but originally broadcast a day later, after the standoff was over, to protect the hostages. (Warning: Audio is in Spanish only)

Reviews of What Happened When the War Was Over; further stories of Gonzalo Llorente and Carlos Tejada Alonso y Leon by Rebecca Pawel

Surely a must read for all those who read and enjoyed Rebecca Pawel's Captain Tejada series. She has neatly tied up a few lose ends, told us more about several of the primary characters, and brought the story to a heartfelt end.

You have subscribed to alerts for Rebecca Pawel.

You have been added to Rebecca Pawel's favorite list.

You can also sign-up to receive email notifications whenever Rebecca Pawel releases a new book.