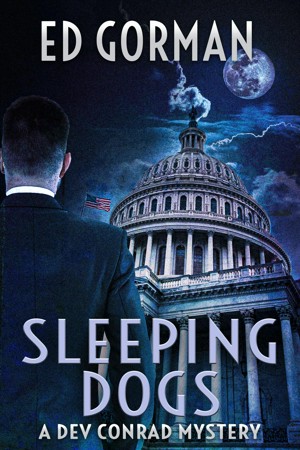 When a major televised debate proves to be a disaster for the senator, Dev is forced to look into the backgrounds of the senator's staff, which includes several people who have tangled and troubled relationships with their boss.

Dev's investigation takes him through the highs and lows of the political system, the well-meaning people on both sides of the aisle, and the increasingly dark forces that work to destroy reputations and lives. It also leads him into the frightening murder of a sleazy political op who knows something about Senator Nichols that could completely destroy his career.

Ed Gorman is the author of several political thrillers, including the acclaimed The Marilyn Tapes and The First Lady. In Sleeping Dogs, he looks at how money, power, and unchecked ambition have turned election campaigns into modern gladiatorial contests.
Available ebook formats: epub
Price: $3.99 USD
Buy Add to Library Give as a Gift
How gifting works
Create Widget
Tags: thriller drama

You have subscribed to Smashwords Alerts new release notifications for Ed Gorman.

You have been added to Ed Gorman's favorite list.

You can also sign-up to receive email notifications whenever Ed Gorman releases a new book.