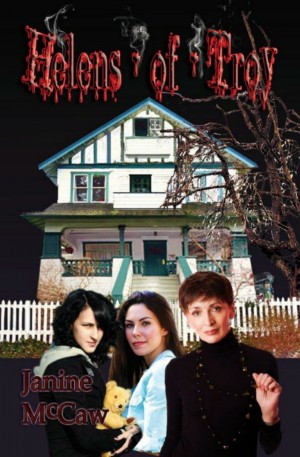 By Janine McCaw
Rated 3.33/5 based on 3 reviews
Fifteen year old Goth-chic Ellie has a lot of explaining to do. She’s just moved to the small town of Troy, fought with her uptight mother Helen, met the boy of her dreams and found a dead body on her sexy “new-age” grandmother Helena’s porch. All on the first night! Helens-of-Troy, because it's not okay to love a vampire. More
Helens-of-Troy
by Janine McCaw
FANTASY/SUPERNATURAL

Fifteen year old Goth-chic Ellie has a lot of explaining to do. She’s just moved to the small town of Troy, fought with her uptight mother Helen, met the boy of her dreams and found a dead body on her sexy “new-age” grandmother Helena’s porch. All on the first night!

But Ellie’s not alone. Helen is hiding something. Helen knows all about the kind of eerie dreams her daughter is having — the dreams that show the whereabouts of the missing children of Troy — because she’s had them herself. But she’ll never admit it. Not while Ellie’s sex-crazed friend Ryan is safely behind bars for the murders. Helen knows what it’s like to be attracted to dangerous men.

Then there’s the little matter between Helena and Gaspar Bonvillaine, the teenaged vampire who is learning to feed on young prey. Now that he’s caught Ellie, he doesn’t know whether he wants to kill her or turn her to the dark side and keep her forever. Helena should have finished him off when she had the chance.

To survive the vampire feeding frenzy surrounding them, mom Helen needs to come to terms with her own insecurities and deal with the gifts she has. Helena must learn to ground herself for the good of mankind and more importantly her own family. And Ellie has the toughest choice of all. Ellie must decide whether its time to let her own childhood go and become the woman she is destined to be, one of the ageless and timeless “Helens of Troy”.

Author Janine McCaw (Olivia’s Mine, Feb. 2006,) has written this 100,000 word novel, the first in a fantasy series about “the Helens”. The three generations of gatekeepers will take the reader on a trip to a realm mere mortals fear to visit alone, and they’ll make her want to stay a while.
Download: epub mobi (Kindle) pdf more Online Reader
lrf pdb txt
Price: Free! USD
Add to Library
Create Widget
Tags: vampires paranormal teenagers goth
About Janine McCaw

Author Janine McCaw is known for believable characters being placed in circumstances they'd probably rather not be in, leading to twisting plotlines that keep the reader guessing. While her first novel, Olivia's Mine, is a fictional account of historical events that happened during the early 1900's at Britannia Beach, B.C., McCaw also writes in the general, paranormal, YA, urban fantasy and chick-lit genres.

The Helens-0f-Troy series is aimed at YA/Adult audiences that enjoy a little humor, a little horror and a lot of family drama. The first three books in the series are Helen's-of-Troy (released), Nightmare on Jacey Street (pre-release) and Boughs of Holly (pre-release) and follow the paranormal adventures of Helena, Helen and Ellie LaRose.

Pumper, the story of a firefighter who rescues a young child and the publicity goes to his head, is also in the works.

McCaw lives in Vancouver, British Columbia with her husband Paul. She is not a zombie (twitter) but has been known to roam the streets that way... and not just on Halloween.

Reviews of Helens-of-Troy by Janine McCaw

You know, I really wanted to love this book. It was billed as "The Gilmore Girls meets Buffy the Vampire Slayer", so I had high hopes.

I started noticing minor editing issues, missing quotation marks, apostrophes used to pluralise words, that sort of thing. This was still early, though (maybe 10% in), and they weren't too bad. The story was compelling enough for me to ignore them. "Maybe it's worth three stars, at least," I thought. Plus, I was really feeling The Gilmore Girls vibe at that point, and I LOVE The Gilmore girls.

But the editing got worse. Not only the punctuation problems, I saw lots of redundancy, people "Thinking to themselves" or "Shrugging their shoulders". No. Unless you're writing about telepaths, thinking to yourself is redundant. Okay, so there are some instances of telepathy in this book, but none of them had anything to do with it - it's not like anybody was thinking to themselves as opposed to thinking to others or anything.

There's lots of head-hopping too. In the same scene, sometimes in the same paragraph. To the point where at the top of the screen on my e-reader, I'm seeing the thoughts and feelings of one character, and by the time I get to the end of the screen, I'm in a completely different one's head. It actually got confusing at times.

The thing is, the story got worse as well... or maybe it was just my enjoyment of it being affected by all those others issues. Either way, by the time I finished the book, it was all seeming just a little silly.

Great potential, but poor editing grossly let this book down.

(reviewed 2 years after purchase)
Monica-Marie Vincent reviewed on May 29, 2012

From the moment that I picked up this book I was enthralled. The angst of the teenaged daughter mixed with the angst of the adult mother was an intoxicating mix. It was easy to identify with something in each of the main female characters which is what made it an incredibly fun read. I can't wait to see what else is in store for the Helens of Troy!!

This story is a clever premise, that the Helens have longer lives and are in tune with the spirit world. The story is a coming of age for the grand-daughter; a coming to terms with her powers and family business for the mother; and a resolving past issues for the grandma.

It was a book that immediately grabbed you, demanded your attention, and kept you glued to the pages wanting more. I give this 4 out of 5 clouds.

This product or book may have been distributed for review; this in no way affects my opinions or reviews.

You have subscribed to alerts for Janine McCaw.

You have been added to Janine McCaw's favorite list.

You can also sign-up to receive email notifications whenever Janine McCaw releases a new book.