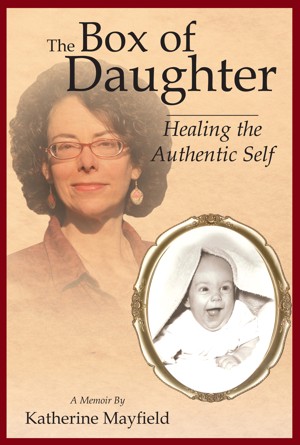 The Box of Daughter

By Katherine Mayfield
The Box of Daughter is an eloquent, compassionate portrayal of the author’s quest to heal from the strain of coping with a dysfunctional family and rediscover her authentic self. More
"Well-written, intriguing, and so very enlightening. Thoroughly enjoyed this book, and if I could give it more than “5 stars” I certainly would!!”
—LibraryThing

“Mayfield’s memoir is a testament to the merit of psychological healing through the understanding and expression of feelings. Full of stark realities of abuse but also the hopefulness of healing, Mayfield’s memoir provides helpful insight to those facing similar struggles.”
—Kirkus Reviews

“Katherine Mayfield holds nothing back, and her unflinching, thorough, and articulate honesty is a true gift for anyone wanting to understand, face, and rise above the emotional scars of a damaging childhood."
—Amy Wood, Psy.D., author of Life Your Way

Description:
In her twenties and thirties, the author pursued a professional acting career in an attempt to gain the respect and attention she lacked in childhood, appearing Off-Broadway, in independent films, and on the daytime drama Guiding Light. Entering therapy in her thirties in response to a divorce, she began to unravel the threads of dysfunction in her family of origin.

More than a decade later, armed with the truth about her family, she sought to understand the challenges her parents faced and recover from the trauma while simultaneously acting as the family caregiver for the parents who abused her. Freed from the abuse by the deaths of her parents in 2005 and 2008, the author set foot on an inspiring journey to wholeness – developing self-esteem, uncovering her true self, and finally creating a life that is truly her own.

“A brave, unflinching and exquisitely rendered memoir of a family caught in the tragic and relentless cycles of emotional incest that rob so many of their innocence. Katherine’s life-long struggle to come to grips with her mother’s mental illness and her own lost childhood is at once emotionally devastating and ultimately uplifting. Couldn’t put it down.”
—Darcy Scott, author of Hunter Huntress

A former actress who appeared Off-Broadway and on the daytime drama Guiding Light, Katherine Mayfield is the author of "The Box of Daughter: Overcoming a Legacy of Emotional Abuse," a guide to recovery from bullying, "Bullied," several books on recovery from dysfunctional families, a book of essays, "The Meandering Muse," and two books on the acting business: "Smart Actors, Foolish Choices" and "Acting A to Z", both published by Back Stage Books. Her short story, The Last Visit, which is based on the last time she visited her father in hospice care, won the Honorable Mention award in the 2011 Warren Adler Short Story Contest. "The Box of Daughter" is based on the title poem in her book of poems, "The Box of Daughter and Other Poems."

Ms. Mayfield pursued a professional acting career in her twenties and thirties, performing Off-Broadway, in Hal Hartley’s first film, The Unbelievable Truth, and on the daytime drama Guiding Light. She teaches writing in Maine.

Reviews of The Box of Daughter by Katherine Mayfield

You have subscribed to alerts for Katherine Mayfield.

You have been added to Katherine Mayfield's favorite list.

You can also sign-up to receive email notifications whenever Katherine Mayfield releases a new book.