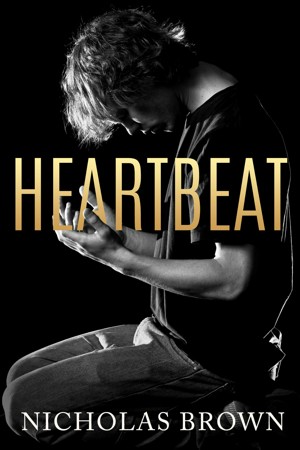 By Nicholas Brown
After the darkness of pain, someone offers a way to the light. More
Thomas Hart lives in the numb aftermath of his brother’s tragic death. After spending six months institutionalized for attempted suicide, Thomas returns home to build a new life for himself. He goes to therapy, starts over at a different high school, and makes new friends. All while completely abandoning his old reputation as a state champion swimmer. Or so he thought.

Thomas can’t seem to get resident star athlete Ethan Cooper out of his head. With dimples that have a track record and a kind touch capable of all but unravelling him, Ethan is everything Thomas can’t seem to have, or be. Because there’s no going back to the person he was before the accident that claimed his brother’s life.

So the question hangs. Can Thomas embrace his new existence, make peace with the past, and embrace a future that may include falling in love? Or will his old life continue to barge in, preventing him from moving on?
Available ebook formats: epub mobi pdf lrf pdb txt html
First 15% Sample: mobi (Kindle) lrf pdb Online Reader
Price: $5.99 USD
Buy Add to Library Give as a Gift
How gifting works
Create Widget
Tags: romance depression bisexual grief mm romance new adult lgbtq hurt comfort
About Nicholas Brown

Nicholas Brown is a philosopher and an award-winning literary fiction writer obsessed with all things relating to infinity. Discovering new music he can write to and watching films—especially Nouvelle Vague cinema—over and over again are a few of his favorite things to do in this life. Nicholas would be the first to admit he is, in fact, a cynic, yet because life and the universe seem to have a somewhat twisted sense of humor, he cannot help but write love stories, nor can he help believing one of these days he will actually live one. That is perhaps the only paradox he accepts, for he has no other choice.

Nicholas calls certain versions of himself “his ghosts,” mainly because he’s lived a life divided into sections: the years he was not himself; the ones he was absent for; times when he felt better; times when he wished he could feel; moments he felt seen…versions of a self, of him.

Reviews of Heartbeat by Nicholas Brown

You have subscribed to Smashwords Alerts new release notifications for Nicholas Brown.

You have been added to Nicholas Brown's favorite list.

You can also sign-up to receive email notifications whenever Nicholas Brown releases a new book.