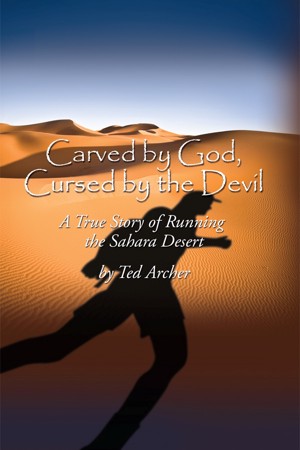 Carved by God, Cursed by the Devil

By Ted Archer
The event is The Marathon of the Sands, one of the world's most brutal adventure races. A 153-mile run through Morocco's Sahara Desert, it is one of the toughest races on the planet. It winds through sand dunes, rock gardens, salt flats, and mountains - all in 120-degree heat. Ted Archer, a top American finisher, tells of the struggles and the people who persevere to conquer this grueling event.
Available ebook formats: epub mobi pdf rtf lrf pdb txt html
First 50% Sample: epub mobi (Kindle) lrf more Online Reader
pdb
Price: $4.99 USD
Buy Add to Library Give as a Gift
How gifting works
Create Widget
Tags: marathon des sables running ultrarunning mds
About Ted Archer

Ted Archer is a native Californian who works as Vice President of a marketing and operations consulting company. Prior to competing in the Marathon Des Sables, he competed in four marathons and one 50-mile race, Rocky Raccoon, which he won in 2008. His 16th place finish at MDS - the best by an American - was unexpected. Following his 2008 MDS experience, Ted returned in 2009 as part of the first-ever American team to medal at the event (they were 3rd place overall).

Reviews of Carved by God, Cursed by the Devil by Ted Archer

You have subscribed to alerts for Ted Archer.

You have been added to Ted Archer's favorite list.

You can also sign-up to receive email notifications whenever Ted Archer releases a new book.