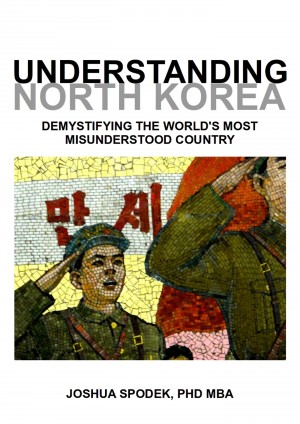 By Joshua
Rated 5.00/5 based on 1 reviews
North Korea is one of the world's least understood, yet most important countries, all the more so with the recent death of Kim Jong Il.

Almost no book, article, or other media makes sense of North Korea or presents it simply, without sensationalism or polarization.

This brief book does. More
The death of Kim Jong Il has reignited popular intrigue for North Korea, justifiably so.

Few understand this isolated and authoritarian country despite its paramount global importance – the site of a major war, a nuclear power hosting the world's fourth largest military and most militarized border. An estimated ten percent of its population died in famines while its leaders indulged. Despite including it in his “axis of evil,” even George W. Bush didn't hint at invading.

How can we understand this mysterious country, its leaders, and its people?

Almost no book, article, or other media makes sense of North Korea or presents it simply, without sensationalism or polarization.

This brief book does.

He is an executive / personal coach working with Columbia Business School’s Program on Social Intelligence and has led leadership seminars at the New York Academy of Sciences and the business schools of NYU and Columbia. He also creates art, teaches or taught at Parsons School of Design and NYU-Tisch School of Art, has occasional gallery showings, and installs large public art.

He has been quoted and profiled in the New York Times, Wall Street Journal, Washington Post, USA Today, Fortune, CNN, and the major broadcast networks. Esquire Magazine named him “Best and Brightest” in its annual Genius issue.

It’s natural to assume that North Korea is insane and illogical in its actions. It’s also easy to think of the citizens of North Korea as simple drones of the state. Surely there is there can be no reasoning to explain the actions of the leadership of the hermit kingdom?
This book presents that there is in fact a method to the 'madness' and the western world assuming “insanity” is exactly what the North Korean leadership intend for us to believe. The author also presents what he describes as a “toy proposal” to allow for the opening-up of the nation. A very though provoking read that may totally change how you interpret the country.

You have subscribed to alerts for Joshua.

You can also sign-up to receive email notifications whenever Joshua releases a new book.