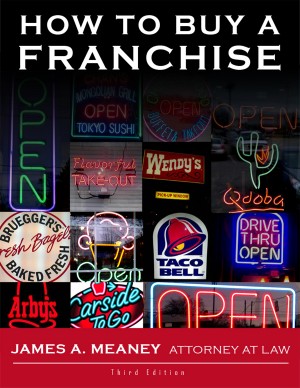 How to Buy a Franchise

James A. Meaney, a frequent presenter on franchise topics, is a franchise attorney who has practiced in the area for nearly 30 years. Mr. Meaney is a partner with Zaino & Humphrey, LPA in Dublin, Ohio.

During his career, Mr. Meaney has held the following positions: General Counsel and Vice President of Franchise Development for Damon’s Grill®, General Counsel of the Ohio Petroleum Retailers and Repair Association, Section Chief of the Ohio Attorney General’s Consumer Protection Section (responsible for enforcement of Ohio’s Business Opportunity Law), Chairman of the Columbus Bar Association’s Franchise and Distribution Law Committee, and a member of the Board of Governors, Columbus Bar Association.

He has also contributed numerous articles and presentations to various franchising publications, and is the author of How to Buy a Franchise. Mr. Meaney has been a member of The American Bar Association’s Forum on Franchising since 1989 and has had the honor of presenting at a number of Annual Forums, most recently including: “Starting A Franchise System: Practical Considerations, Planning and Development,” American Bar Association Forum on Franchising, 2010 Annual Forum (Co-author - October 2010).

Visit www.fddlawyer.com for more information about Mr. Meaney and his franchise practice.

Reviews of How to Buy a Franchise by Jim Meaney

You have subscribed to alerts for Jim Meaney.

You have been added to Jim Meaney's favorite list.

You can also sign-up to receive email notifications whenever Jim Meaney releases a new book.