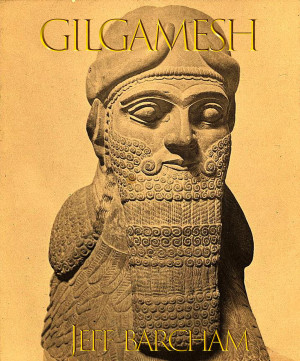 By Jeff Barcham
Rated 4.00/5 based on 1 review
Gilgamesh is a new version of the ancient Babylonian Epic. Gilgamesh is the brash young King of Uruk (a city in the modern Iraq). When a rival, in the form of the wild-man Enkidu, arrives, it sets off a sequence of battles and journeys that lead Gilgamesh to the end of the world, and the limits of his sanity. More
This book presents a new version (in verse) of the ancient Sumerian and Babylonian Epic of Gilgamesh. It tells the history of Gilgamesh, the king of Uruk (a city called Warka in modern Iraq) who is believed to have lived in the 28th century BC.

Gilgamesh starts the story as a brilliant but brash monarch, having inherited the throne from his father (Lugalbanda) at a young age, with no rivals. When an equally powerful rival emerges, in a wild man named Enkidu, Gilgamesh realises that he needs to perform heroic feats to make his name.

In so doing, Gilgamesh and Enkidu offend the gods and the people of Uruk, and learns the value of diplomacy and subterfuge.
When Enkidu dies, Gilgamesh is grief-stricken, renounces his throne, and embarks on a journey to discover the secret of immortality. There he finds Utanapishtim, the Sumerian equivalent of Noah, who survived the great flood and was granted immortality by the gods.

Reviews of Gilgamesh by Jeff Barcham

Gilgamesh, like the biblical Old Testament, the Buddhavacana, the Confucian texts, the Mabinogion, the Norse Sagas, the Iliad and the Mahabharata is part of the philosophical foundation of our Indo-European-Semitic culture.
There are important resemblances and differences.
Gilgamesh and the Old Testament were compiled over a very long time, and they share a folk-memory of a great flood, possibly the period after the last great Ice Age when the rising Atlantic burst through the Straits of Gibraltar into the Mediterranean.
The Norse Sagas, the Iliad and the Mahabharata enumerate members of a comparable pantheon (which, by contrast, Jews and Muslims see as a single entity and Christians as a trinity of beings).
Gilgamesh, the Mahabharata , the Buddhavacana, the Confucian texts and the Old Testament were written down, whereas the Norse Sagas, the Iliad and the Mabinogion were passed on by bards.
There are differences in style, substance and accessibility.
For a variety of reasons, Gilgamesh has been relatively inaccessible: it was written down piecemeal in a variety of different styles over a couple of milennia, and, like much of the Old Testament (or, for that matter, much of the Qur’an) it reflects the way of life of an ancient herding society, totally at odds with most modern societies.
One difficulty has been that the precise areas of meaning of many of the words or idioms in Sumerian, Akkadian and related languages are simply not clear. (How can an Inuit be expected to understand ‘heatwave’ or sandstorm’, or a Congo pygmy to understand ‘apple orchard’.
There are a number of versions in English, some of which are very difficult to follow, lacking any sense of coherence. Now, from what individual scholars have written, it may be true that the heterogeneous collection of tablets that make up the Saga of Gilgamesh are by their nature incoherent, but being told so doesn’t help an anglophone like me with a benign interest in comparative religion.
Jeff Barcham has done us all a considerable service. His poetic version of the Saga (Smashwords 2011, ISBN 978-0-646-55776-2) is coherent and literate, with an epic flavour to it. He freely concedes that he has cut and pasted here and there in the interest of coherence, and has presented his material in ways more accessible to modern readers. He also concedes he is no scholar of these ancient languages, but freely acknowledges his sources, works by Andrew George, John Gardner and John Maier, and recommends their works highly to those whose interest he has aroused.
His new English version of this ancient story (or collection of stories) is a bridge to what seems like an alien world in terms of time, place and culture. But it’s part not only of where we come from, but also of where we are. No-one with any sense in today’s world would deny that we are constantly touched by the ongoing story of Iraq and its people, and of their neighbours in Syria, Israel, Jordan, Lebanon, Saudi Arabia, Iran and the Gulf States. The Semitic people have been around for a long time, and they’re here to stay.

You have subscribed to alerts for Jeff Barcham.

You have been added to Jeff Barcham's favorite list.

You can also sign-up to receive email notifications whenever Jeff Barcham releases a new book.