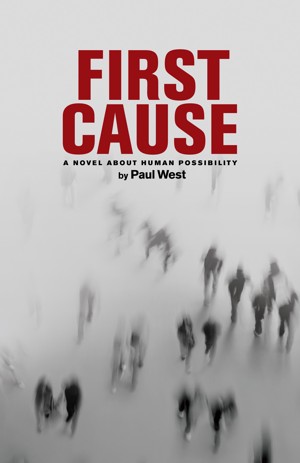 By Paul West
A week after a battery of worldwide explosions, journalist Adam Grey wakes up in the hospital. He pieces together the events leading to his injury, involving a woman named Angela. Confronted with the truth behind the attacks, they--along with the world at large--are forced to reconsider conventional assumptions about human nature and possibility. More
First Cause begins in a news van, as a reporter and her cameraman are on their way to cover a street fair in downtown Manhattan. Their calm is interrupted by an exploding truck, not far from their van as it passes through Times Square. Mobilizing to report from the scene, they are informed by their superiors that an explosion has also occurred downtown. They scarcely have time to respond to this new bit of information when a second bomb explodes, ending their broadcast.

We then meet Adam Grey, a New York City freelance journalist, as he wakes up in a hospital bed. Through Adam's conversation with his intern, we learn that similar explosions have occurred in most of the world's major cities and power centers. The attacks were well planned; most governments have lost huge portions of their leadership, scores of civilians have been killed, and a rising panic has begun to sweep the world. The United States Cabinet has been almost entirely lost, and a Senator named Cyrus Reardon has been selected to lead a provisional Cabinet from a secret location.

Upon reflection, Adam realizes that his hospital stay is the result of an incident in a stairwell, involving a recent acquaintance named Angela. After a brief courtship, Angela seems to have indirectly caused his hospitalization...and then disappeared.

As the world stumbles its way through the crisis, news agencies and the world's surviving leaders receive a cryptic letter, claiming to be from the attackers and making outlandish proclamations. Angela resurfaces, informing Adam that 'the letters are true' and she is connected to their source. She asks Adam to use his connections to alert President Reardon of the nature of the threat they face; he reluctantly agrees...
Available ebook formats: epub mobi pdf rtf lrf pdb txt html
First 25% Sample: epub mobi (Kindle) lrf more Online Reader
pdb
Price: $2.99 USD
Buy Add to Library Give as a Gift
How gifting works
Create Widget
Tags: thriller scifi science fiction dystopian utopian social science fiction apocalyptic science fiction first cause paul west
About Paul West

Paul West was born and raised in New York City; he currently resides in Harlem, where he has lived for much of his life. After graduating from NYU with a B.A. in History, he worked in the education and nonprofit world for many years before switching lanes and working in advertising and then fashion.

First Cause was conceived as a screenplay idea in the early 1990s, when West was still an undergraduate; he shelved the project for nearly a decade, and began work again in 1999. Paul West is a sports enthusiast, a student of people, a lover of music, a voracious reader and a fervent believer in human possibility.

Paul is also a writer for Through The Fence Baseball, primarily covering the NL East and New York Mets, and a recurring guest on Fox Sports Radio. To follow Paul's Through The Fence articles, go to http://throughthefencebaseball.com/author/paul-west/ and for Paul's other sports writing, visit PDub's Sports Hub at http://pdubssportshub.wordpress.com/

Interview with the author
Paul West's YouTube interview about First Cause: A Novel About Human Possibility

2012 Kickstarter Campaign Video
First Cause: A Novel About Human Possibility relaunched in July 2012 at Fandom Fest 2012, thanks in part to the success of the First Cause Relaunch Campaign on Kickstarter.com!

You have subscribed to alerts for Paul West.

You have been added to Paul West's favorite list.

You can also sign-up to receive email notifications whenever Paul West releases a new book.