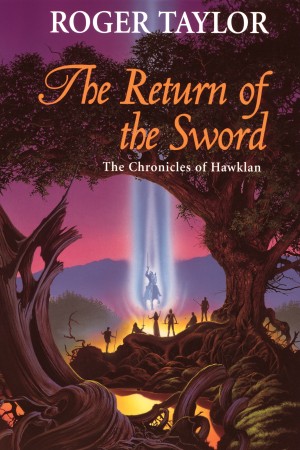 The Return of the Sword

By Roger Taylor
The final volume in the epic fantasy series "The Chronicles of Hawklan". More
The dark lord Sumeral is dead - His mortal body destroyed and His will scattered some sixteen or so years ago.

Now, travellers sent to learn more of the world beyond Orthlund, Fyorlund and Riddin are returning. They bring with them people in need of help and with disturbing tales to tell - Antyr, the Dream Finder; Farnor, to whom the great forest can speak; Vredech, the once preaching brother; Pinnatte, victim of a fearful experiment by the Kyrosdyn; and Thyrn, the Caddoran.

Their disparate stories come together to yield a terrifying revelation - somewhere, Sumeral is whole again and struggling to return. But other, even darker threads are being drawn together. Andawyr and the Cadwanol, in their relentless search for truth, have touched on a threat to their world more terrible than Sumeral. More terrible by far...
Available ebook formats: epub mobi pdf lrf html
First 20% Sample: mobi (Kindle) lrf Online Reader
Price: $5.99 USD
Buy Add to Library Give as a Gift
How gifting works
Create Widget
Tags: adventure fantasy sword and sorcery fantasy series series hawklan roger taylor chronicles of hawklan
About Roger Taylor

Roger Taylor was born in Heywood, Lancashire, England and now lives in the Wirral. He is a chartered civil and structural engineer, a pistol, rifle and shotgun shooter, instructor/student in aikido, and an enthusiastic and loud but bone-jarringly inaccurate piano player.

Ostensibly fantasy, his fiction is much more than it seems and has been called ‘subtly subversive’. He wrote four books between 1983 and 1986 and built up a handsome rejection file before the third was accepted by Headline to become the first two books of the Chronicles of Hawklan.

Also in Series: The Chronicles of Hawklan

You have subscribed to alerts for Roger Taylor.

You have been added to Roger Taylor's favorite list.

You can also sign-up to receive email notifications whenever Roger Taylor releases a new book.