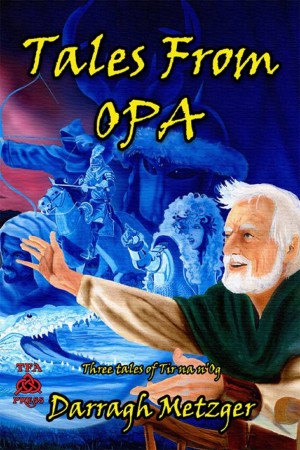 His stories bring to life the fabulous land called Tir na n'Og, the Fey who rule there, and of the human champions who do their bidding—willingly and otherwise.

But beware: for some, his tales change the way they view their world, their beliefs, their values—and themselves.

The Heart of a Cavalier: A young scholar witnesses the burning of Joan of Arc, and goes on a quest for redemption that sweeps him into a real-life adventure he could never have imagined. Is he facing God's vengeance, or the answer to his prayers? Either way, the gentle student must find the Hero within to survive.

The Sign of the Golden Archer: Replacing the Ranger of the Gold Triad is not the easiest job in the world, as a young archer discovers when he sets out to win a game of wit and nerve against one of Tir na n'Og's deadliest monsters.

Westmere: the new Mystic of the Black Triad must solve a horrific mystery to save a town where hope has been abandoned. Harder still, she must forge a bond with her Triad: a cold-blooded, secretive Cavalier and a flamboyant, crafty Ranger. But all her cunning, all her magic, and all her survival skills may not be enough to save them from a menace even the Fey fear.

Tales from Opa is a book with historical characters in a fantasy setting, legendary heroes, magical quests, monsters, dragons, unicorns, trolls, warrior women, sword-wielding Knights and rogues, magic, mayhem, humor, and horror. It is more than an introduction to the mythical land of Tir na n'Og and the truth behind the tales told of its greatest heroes; it is a gateway to enchantment for readers of all ages.

I make my living in the world's two lowest-paying professions: acting and writing. While my resume includes stage and screen credits, I've spent the last several years wearing armor, riding horses, and swinging swords with The Seattle Knights, a stage combat and jousting theatrical troupe. My publishing credits include plays, non-fiction articles, and short stories, one of which made The StorySouth Millions Writers Award Notable Stories of 2005. I've written two short story collections and nine--no, ten--novels to date, sold three of them in 2002, and have now re-released them under my own imprint, TFA Press. I recently completed my first non-fiction project, which is awaiting publication. I also sing and write songs for A Little Knight Music and The Badb. If I had free time (which I don't), I'd spend it with horses. I'm married to artist/fight director Dameon Willich.