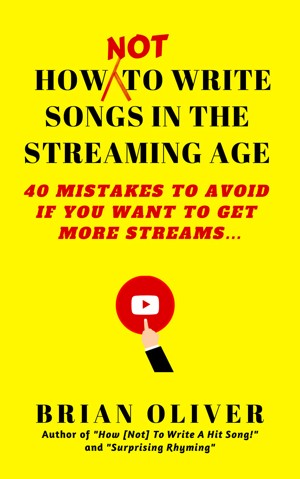 By Brian Oliver
This book highlights how music streaming is transforming the way songs are being written and recorded today. Successful streaming now requires a different type of song. The book offers 40 vital tips and essential advice on how new, aspiring songwriters can make their songs more streaming-friendly - and gain more streams as a result. More
“HOW [NOT] TO WRITE SONGS IN THE STREAMING AGE - 40 MISTAKES TO AVOID IF YOU WANT TO GET MORE STREAMS” is the new book by Brian Oliver, author of three 5-star rated books: "SURPRISING RHYMING" ... “HOW [NOT] TO WRITE A HIT SONG! 101 Common Mistakes to Avoid If You Want Songwriting Success” ... and “HOW [NOT] TO WRITE GREAT LYRICS! 40 Common Mistakes to Avoid When Writing Lyrics for Your Songs”.

“HOW [NOT] TO WRITE SONGS IN THE STREAMING AGE” takes a close look at how music streaming has not only revolutionized the way people consume music, it is also transforming the way songs are being written and recorded today. It’s changing the whole methodology of songwriting.

“Successful streaming now requires a different type of song,” says author Brian Oliver. “Songwriters need to rethink their songwriting approach to meet the needs of streaming audiences and the growing number of ‘click and skip’ listeners who don’t always stick around for the chorus.”

The book examines the essential elements consistently found in the construction, melodies and lyrics of the biggest streaming hits. Crucially, it highlights the most common errors made when these key components are built into a song. In doing so, it aims to help new, aspiring songwriters avoid such mistakes in their own songs.

With more songs now being designed to please the streaming companies’ algorithms, the core objective of this book is to help provide a better understanding of the changing building blocks of song structure in the streaming age ... an era in which the verse has gained a new importance.

The book provides 40 insightful tips, plus a comprehensive Checklist, to help new songwriters dodge the most common mistakes that are made when trying to write streaming-friendly songs….so they can go on and gain many more streams as a result.

The book highlights how songwriters face a period of great change as the global dominance of music streaming continues to have a profound impact on the very nature of songs and songwriting.

Song structures that have always been at the heart of hit songs are being replaced by a song form that has one overriding objective: Keep streaming audiences listening for at least the first 30 seconds—otherwise a play won’t count as a stream…. the song may be downgraded on the streaming service’s database….and nobody gets paid.

Streaming platforms are now where the majority of music consumers are, so songwriters and artists need to be there too. But to succeed in the streaming market, creators need to adapt to the new songwriting conventions that are emerging in this algorithm-driven musical environment.

As award-winning songwriter/producer Shane McAnally puts it: "We’re talking about two different worlds now….What connects in the streaming world and what works as a radio song are not always the same thing now."

Brian Oliver is a highly experienced music publisher, songwriter, musician, music journalist, and music consultant who has been involved in the music industry for over 30 years.
As a publisher, he has worked on the songs of legendary writers such as Neil Diamond, Janis Ian, James Taylor, Albert Hammond, Chip Taylor, Gilbert O’Sullivan and Kenny Young, as well as bands like The Stranglers and The Shadows, and leading film & TV composer Colin Towns. He has also been a consultant to major companies such as Universal Music, Warner Music and BMG.

You have subscribed to Smashwords Alerts new release notifications for Brian Oliver.

You have been added to Brian Oliver's favorite list.

You can also sign-up to receive email notifications whenever Brian Oliver releases a new book.