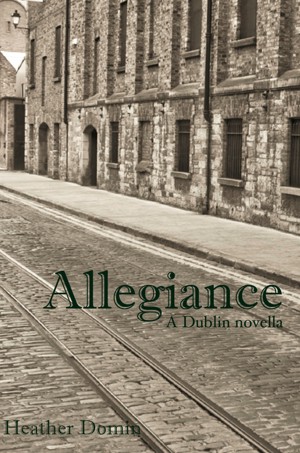 Rated 4.80/5 based on 5 reviews
A Scottish MI5 informant falls for an Irish gun-runner in 1922 Dublin. More
William Young is an MI5 informant, using his working-class background to gain the trust of groups deemed a threat to the Crown. Tiring of his double life, William travels to Dublin for one last assignment: infiltrating a group of IRA supporters. But these "rebels" are not what he expected — and one of them, a firebrand named Adam with a past as painful as his own, shakes William's uncertain footing to its foundation. As the crisis in Dublin escalates, William treads a dangerous path between the violence in the streets, the vengeance of the Crown, and the costliest risk of all — falling in love with the man he was sent to betray.
Download: epub mobi (Kindle) lrf more Online Reader
pdb txt
Price: Free! USD
Add to Library
Create Widget
Tags: historical romance dublin forbidden love 1920s action romance male male bisexual fiction undercover agent irish civil war espionage romance

Reviews of Allegiance: A Dublin Novella by Heather Domin

It's great, basically. I think the only thing that bothered me about it was the fact that all the main characters were very much on the periphery of the action. I also didn't like Adam as much as the author seemed to. I wish the relationship had been allowed to build for a little longer, so that I'd have rooted for them a little harder. But Domin's version of Dublin in 1922 was totally believable, and rather exciting. It was incredible to think that my beloved grandmother, born in 1917, was five years old when all of this was going on around the corner! I really liked Gerald and Mary.

Not sure the ending was that believable, and it felt rushed to me. I wanted more with these characters. Ultimately, it's not as satisfying a love story as it is a historical novel. But Domin is a definite talent. I'm going to try her Roman series next.

I have no words to describe how deeply touched I was by this novella...I read it yesterday and it's like in my mind I'm still in the streets of Dublin, following William, or in that pub dancing and laughing alongside Adam and him, or just watching William tearing apart, trying to make the right decision, and feeling his inner turmoil as if it were my own. Allegiance is a perfect blend of history and romance...the story about friendship, allegiance, duty, fighting for a freedom and love...and no matter how much I wished we'd get more of William and Adam, those stolen moments evoked more emotions in me than most of the full-length novels I've read. I honestly can't recommend it high enough...

Excellent! I am amazed that this was a free read. I have not been sucked into a great historical in a long, long time! Thank you so much for sharing this awesome novella. I look forward to checking out more of Domin's work!

Domin has an uncanny knack for setting an historical scene--just the right amount of detail to really bring the time alive, without being in your face or pedantic about it. The writing is elegant, the characters are full-blooded and complicated, and there's just the right mix of romance and action. A fantastic read.

A heart-stopping tale of loyalty and love; keen descriptions and tight dialogue frame the action as suspense builds, resulting in a satisfying, poignant conclusion. Domin’s strengths are her authentic characters and sharp eye for detail. Great prose!

You have subscribed to alerts for Heather Domin.

You have been added to Heather Domin's favorite list.

You can also sign-up to receive email notifications whenever Heather Domin releases a new book.