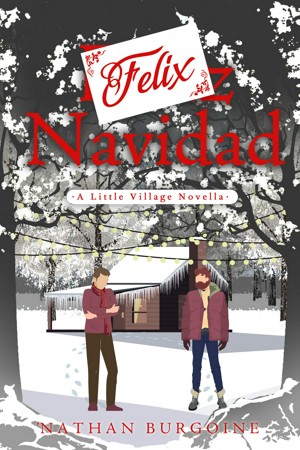 By 'Nathan Burgoine
After attending the wedding of a good friend solo, Felix treats himself to Christmas in Hawai'i—until ice rain strands him in a small cabin in Ontario with fellow wedding guest—and handsome farmer—Kevin, for the holiday gift Felix definitely didn’t plan on. More
Felix doesn’t do impulsive anymore. But attending a friend’s wedding reminds Felix he’s the only one of his friends attending solo, and recent losses have him thinking he's swung too far in the not-impulsive direction.

When dancing doesn’t work out, Felix keeps high hopes for his vacation right up until the first flight cancellation. After bumping into a stranded Kevin, who lost his flight home, Felix gives impulse a third try: Why not drive to Toronto together? But after ice rain strands them halfway, it looks like Felix isn’t going to get to give himself his gift after all. Instead, this Christmas is a small cabin—and Kevin.

A cat lover, ‘Nathan managed to fall in love and marry Daniel, who is a confirmed dog person. Their ongoing “cat or dog?” détente continues (and will likely soon end with the acquisition of a dog). They live in Ottawa, Canada, where socialized health care and gay marriage have yet to cause the sky to cave in.

You have subscribed to Smashwords Alerts new release notifications for &#039;Nathan Burgoine.

You have been added to &#039;Nathan Burgoine's favorite list.

You can also sign-up to receive email notifications whenever &#039;Nathan Burgoine releases a new book.