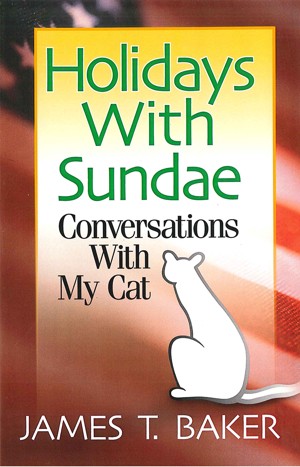 Holidays With Sundae: Conversations With My Cat

By Dr James T. Baker
Rated 5.00/5 based on 1 reviews
James Baker invites readers to participate in a conversations with his cat Sundae. Using holiday times as the conversation pieces, Sundae is comes through as real as person we know. Quick witted, critical, and a deft judge of human strengths and weaknesses; Sundae provides a barometer in which we can examine ourselves. Cat owners will instantly identify with Sundae's particular wisdom. More
Holidays with Sundae: Conversations with My Cat invites you to experience the delight of conversations with a cat. Pet owners understand that their furry companions have the power of communication, but Sundae actually speaks with her "owner". Through the conversations between Sundae and James, this cat becomes as real a character as any person we know. As a thinker and critic of the human condition, Sundae's feline perspective might surprise you. Sundae becomes a mirror in which we can examine ourselves.

James T. Baker brings us into the conversation with Sundae using holidays as the springboard for their dialogue. Each holiday, thoroughly familiar to all of us, is introduced in a completely different perspective as Sundae questions why humans participate in such activities. Sundae leaves us to wonder why we did not already think of each holiday in the fresh-eyed and reverent way a cat might view our festive and reflective times. On April Fool's Day, for example, James plays a horrid prank on his companion by telling Sundae there is no more cat food in the house. Sundae decides she will positively die with hunger should she go a few hours without her food bowl full. As James reveals his prank on the unsuspecting cat, Sundae quickly turns the tables on her "owner" by pulling off an April Fool's joke of her own. Needless to say, cat "owners" will instantly identify with Sundae's particular wit and wisdom as her and James converse throughout the year.

Pet owners have long known that our animals are as much a part of our family as any human members. Holidays with Sundae: Conversations with My Cat will remind you of that seemingly simple concept should you have ever forgotten.

James Baker developed his passion for history and religion while in high school, during his days as a Bulldog. He is a graduate of Baylor and Florida State Universities and has for many years taught at Western Kentucky University. Throughout his career he has been a prolific writer, authoring 22 books and over 60 articles. His articles have appeared in such places as Christian Century, Commonweal, The Chronicle of Higher Education, and The American Benedictine Review. His creative talents and his unique points of view and insights have also made him a highly sought after speaker. He has delivered addresses and papers in the United States, Italy, Korea, Taiwan, China, and other Asian countries. He often appears in a one person show-presentation of industrialist-philanthropist Andrew Carnegie. In addition to his teaching duties, James directs the Canadian Parliamentary Internship Program.

Sundae is a reflective and intelligent feline, a unique calico. When James, her human, realizes Sundae can converse, his life changes drastically. Thanks in part to MTV, Sundae has amassed a remarkable vocabulary. She and her human companion discuss everything from love to war. No topic is off-limits and the kitty has plenty of questions (for him) about life. Cleverly focusing on holidays, the tongue-in-cheek story moves along smoothly and effortlessly. Holidays with Sundae: Conversations with My Cat is a delightful read.

You have subscribed to alerts for Dr James T. Baker.

Would you like to favorite Dr James T. Baker?

You have been added to Dr James T. Baker's favorite list.