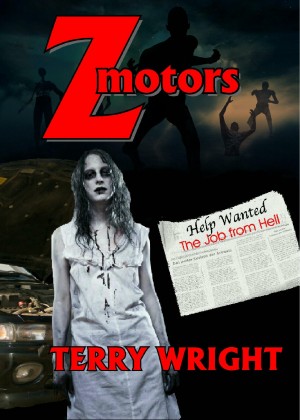 By Terry Wright
In this satire on zombies in the workplace, the dark side of the auto repair business is exposed, and a mechanic’s quest to overcome unemployment leads his family down a disastrous path. More
The owner of Z-motors has a problem with his employees. They are brainless zombies who eat their customers. He needs a mechanic with a brain, so he places a Help Wanted ad in a Denver newspaper. Unemployed Jim Lowry is looking for a job as a Master Mechanic. The perfect position opens up in a small-town auto repair shop on the Colorado plains. He loads his family into their SUV and sets out for Z-motors. He’s about to apply for the job from hell.
Available ebook formats: epub mobi pdf rtf lrf pdb txt html
First 20% Sample: epub mobi (Kindle) lrf more Online Reader
pdb
Price: $0.99 USD
Buy Add to Library Give as a Gift
How gifting works
Create Widget
Tags: short story job satire zombie mechanics unemployed auto shop
About Terry Wright

Reviews of Z-motors by Terry Wright

You have subscribed to alerts for Terry Wright.