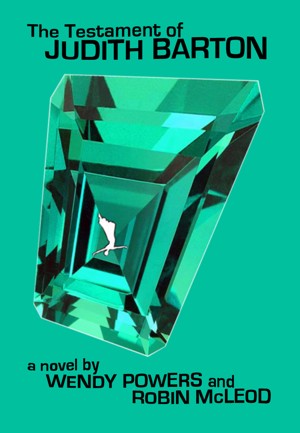 The Testament of Judith Barton

By Wendy Powers
Rated 4.00/5 based on 1 review
Imagine the cinematic masterpiece Vertigo retold by its tragic heroine. More
Judy Barton may be the most-watched and least-understood woman in movie history. Generations of viewers think Ferguson tells us all we need to know when he sputters, "You were his girl!" at the movie's climax. But what if the woman we've come to sympathize with is neither Elster's mistress, nor a willing accessory to murder?

Kirkus Reviews says, "Barton is telling her own tale this time around - that turns out to be a good thing...Ultimately, this is a serious work. Barton doesn't acquit herself a half century after her fatal plunge, but she does spread the blame around to where it belongs. A multifaceted journey for devotees of Vertigo to contemplate and enjoy."
Available ebook formats: epub mobi pdf rtf lrf pdb txt html
First 15% Sample: epub mobi (Kindle) lrf more Online Reader
pdb
Price: $3.99 USD
Buy Add to Library Give as a Gift
How gifting works
Create Widget
Tags: alfred hitchcock vertigo hitchcock jimmy stewart hitchcockian classic films kim novak film classics
About Wendy Powers

Reviews of The Testament of Judith Barton by Wendy Powers

I don't think there's a more hypnotic movie than Vertigo. Alfred Hitchcock's tale of deception and desire in a surreal San Francisco setting has kept me fascinated for most of my adult life, and would easily rank as one of my three or four favorite films. So when I got offered the chance to check out a new take on the tale, I dropped my "Hey, I don't know how to read you guys!" defenses and jumped at the opportunity to spend more time in the film's world.

That opportunity presented itself in the form of a new novel, The Testament of Judith Barton, which is told from the perspective of the female character who is the center of attention throughout Hitchcock's film. Let's not kid ourselves here - Jimmy Stewart is the man, but it was Kim Novak that really drew our stares. So the chance to spend more time with her got me to light up my Kindle, hanker in to my recliner (which has a Vertigo poster right above it), and start turning the pages as fast as I could.

Despite how many times I've seen Vertigo - it was enough times to write a film history term paper on it more than a decade ago, and that number's gone up since - I'm not sure I ever really thought too deeply about Judy Barton, the small town girl from Salina, Kansas who became the key ingredient in the macabre plot. (I suppose talking about Judy Barton herself is kind of a spoiler for the film, but a) her name's kind of in the title, so it's inevitable, and b) if you haven't seen Vertigo in the last 54 years, there's probably no hope for you anyway.) In my mind, I think I believed that Judy Barton was a lost soul by the time we were introduced to her in Vertigo. I caught the back story about who she really was and where she really came from, but she was still just a pawn in a rich white guy's plans. (More on that guy later.)

This testament leaves few stones unturned, tracing Ms. Barton back to her hometown and her childhood. After a brief introduction set in the middle of Vertigo's dangerous plot, the authors' decision to backtrack to her teenage years surprised me, but the first act of the novel quickly won me over by creating a whole new world and a strong sense of hope around a charming young girl. Interactions between young Judy and her father - a hard working man who taught her a lot about life - and her older sister - an aspiring teenage actress with dreams of Hollywood - felt incredibly fresh and got me to take another look at the woman who I knew from Hitchcock's film. There's a lot of growth in the character as her early years are chronicled, and I really enjoyed what the authors' did to build Judy Barton into a sympathetic small town woman.

The second act moves from Judy's hometown past to San Francisco - and what I would call "the present" in Vertigo's universe - and it's then that the book gives a fresh coat of paint to another key character from the film. But it's not the guy you'd expect - Jimmy Stewart's "Scottie" Ferguson really gets the short straw here - it's the devilish Gavin Elster. The man who brings the two leads together is kind of an afterthought in the film, played only briefly by Tom Helmore. (BTW, is there a movie that relies more on its two stars than Vertigo? It's like the '91 Chicago Bulls of movies, except Kim Novak is about 12 zillion times hotter than Scottie Pippen.) The Testament of Judith Barton, on the other hand, gets plenty of miles out of the Elster character, who I started to picture as a snarky fella in the vein of Laurence Olivier's character from Rebecca. We know the character is a bad man once we've seen the movie, but this book really reminds us just how sinister the character who set up his wife really could have been.

I have to admit that I got a little disappointed as the book moved through the events that we saw in Vertigo. I enjoyed the build up and I enjoyed gaining a better understanding of who Judy Barton was and how she got caught up in this awful situation, but re-tracing the steps that led to the film's finale was a slight buzzkill. There were still some nice reveals inside Judy's mind, and the fact that we're drawn so much closer to her character makes the events that unfold even more heartbreaking than they were on film. I should commend the book for these steps, and it's only fair that they remained faithful to the film. Maybe I'm just let down by the final act because I really didn't want Judith Barton's story to end the way I knew it would.

The Testament of Judith Barton is at times a little too cute when it makes sly references to the film - a direct nod to Kim Novak had me struggling to decide between rolling my eyes or snickering at the twist - but there are also times when words that were spoken by Ms. Novak took on an entirely new meaning in my mind. I'm not going to sit here and say that everyone who loves Vertigo will fall in love with this book, because I know how protective us nerds can be about our classics sometimes. The book also acknowledges that it varies from the French novel that inspired Hitchcock's film (D'entre les Morts, if you're keeping score at home), but I'm definitely OK with Powers & McLeod's alternate take on Judy Barton's mind.

In fact, this Hitchcock nerd was more than pleased to scroll through The Testament of Judith Barton. It might not be the most ground breaking novel, but it got me thinking about one of my favorite stories and opened my eyes to new perceptions of something I thought I knew completely. That's worth a lot in my book, and I found myself unable to put The Testament of Judith Barton down. I think there's a lot of entertainment to be had from the novel for even those who don't adore every minute of Hitchcock's film, too.

You have subscribed to alerts for Wendy Powers.

You have been added to Wendy Powers's favorite list.

You can also sign-up to receive email notifications whenever Wendy Powers releases a new book.