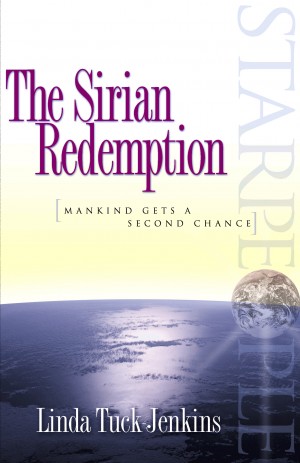 By Linda Tuck-Jenkins
Trilogy: The Awakening, The Quickening, Critical Mass. Eons ago Starpeople came to Earth. They were scientists—genetic engineers—intent on creating new species. The trial went awry. Now they must right their wrongs in order to save humanity & the unity of Creation itself. Against a backdrop of government cover-ups, STARPEOPLE provides an uplifting outcome to doomsday prophecies. More
You saw the "Ancient Aliens" series on the History Channel, but STARPEOPLE started to return over a decade ago!

In a long forgotten era, Starpeople came to this planet. They were scientists--genetic engineers--intent on creating a new species. Unfortunately, the experiments went awry. Now they must right the wrongs of the far distant past in order to save the Earth and the unity of Creation itself!

Against a backdrop of freak storms, electricity blackouts, and government cover-ups, STARPEOPLE: The Sirian Redemption provides an uplifting outcome to doomsday prophecies. With a rich blend of fact, science fiction and New Age thought, this fast-paced thriller presents a message of hope, unity and the importance of every individual--no matter how seemingly imperfect or unlikely--to the Universal Plan.

From the Publisher:
Kelly Saunders has always felt different and haunted by a dream that she can only vaguely recall. But a vacation, a hurricane and a quirky stranger propel the young professional into the dark secrets of Earth's history, military cover-ups, and her role in preparing the planet for the leap to a new dimension of consciousness.
Available ebook formats: epub pdf lrf pdb txt html
First 50% Sample: epub lrf pdb Online Reader
Price: $2.99 USD
Buy Add to Library Give as a Gift
How gifting works
Create Widget
Tags: reincarnation ascension paranormal ufos ufo mythology 2012 novels spiritual fiction peace miracles 2012 ascension ancient aliens
About Linda Tuck-Jenkins

Linda Tuck-Jenkins was fairly normal until age 28. She went to school (BA and MA with honors in Economics, Phi Beta Kappa) then worked as a stock market analyst, college professor, and Director of Economic Research for a Virginia state agency. But, a traumatic experience led her to a psychic, then astrology, and a "chance" encounter with best selling author Jerry Jampolsky who introduced her to meditation and A COURSE IN MIRACLES.

All was well—Linda had a satisfying consulting practice and a rich spiritual life. Until 1991, that is, when a voice began to intrude on her meditations. It wasn’t her voice, she wasn’t that smart. She wrote it down. So, peppered through her journals of mundane thoughts and dreams were shimmering gems of real wisdom. Her life became complicated in 1994 when her Guides gave her the outline of a book and told her to present the ideas she'd received in fictional format. And, that was the genesis of STARPEOPLE: THE SIRIAN REDEMPTION.

You have subscribed to alerts for Linda Tuck-Jenkins.

You have been added to Linda Tuck-Jenkins's favorite list.

You can also sign-up to receive email notifications whenever Linda Tuck-Jenkins releases a new book.