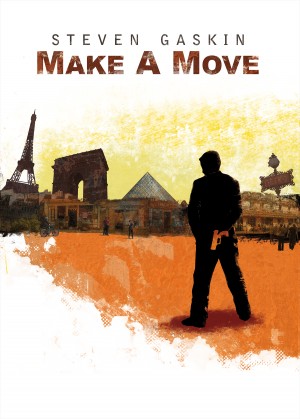 By Steven Gaskin
Rated 4.88/5 based on 8 reviews
Set in a seedy district of Paris, MAKE A MOVE is a slacker-thriller, its reluctant heroes operating with consummate indifference and bleak, occasionally childish humour. Told across six episodes, each a tale in itself, this is a story of beautiful spies and dirty pimps, of petty theft and cinematic history, of strained integrity and callous betrayal.

“How can you not love it here?” More
"A man had come looking to him for shelter, a man so objectionable, the only way he could have further offended Freddy was to get killed and leave his faceless corpse cooling in his cinema, which he had, and now Freddy was under suspicion from his own agency – implicated at best – and in danger of losing the little he had.

Make choices, don't look back, but don't, whatever you do, end up here."

Disgraced British spy, Freddy Mossman, is scraping by as the caretaker of an MI6 safe house in a Parisian red-light district. Bored and drifting, he calls on his old friend Jay, a photojournalist and habitual troublemaker, to visit the city as a diversion. Wanted by the government over some naughty photographs, Jay seizes the opportunity to lay low for a while, but is it low enough?
A chance meeting with Holly, an ex-girlfriend of Freddy's struggling to build a career within the subtle rules of Parisian business, brings the three together in an uneasy friendship. Freddy's haven however, turns out to be anything but safe, for even here he finds his previous life threatening his fragile existence, as he encounters those who would use him for their own, murderous, lucrative ends.
MAKE A MOVE is a slacker-thriller, its reluctant heroes operating with consummate indifference and bleak, occasionally childish humour. Told across six episodes, each a tale in itself, this is a story of beautiful spies and dirty pimps, of petty theft and cinematic history, of strained integrity and callous betrayal.

I'm 37 and live with my wife and son in Manchester. I spend less time in Paris than I'd like.

Reviews of Make a Move by Steven Gaskin

While Freddy ponders whether he’s got the right moral code for his chosen career, across town his former girlfriend Holly Henderson tries to fit in with the French company that acquired her former employer and moved her to the home office.

Stirring the pot is Freddy’s friend Jay McFarlane, a talented but not over-ambitious photographer who already has found his niche in life – causing as much trouble as possible for those he thinks deserve it. Invited to Paris to lighten his friend’s mood, Jay has attracted his own set of government operatives.

Jay’s idea of fun is to steal the neighborhood pimp’s classic car or to put Freddy in a position in which he must fight a celebrity’s two bodyguards. He’s not even above insulting the wife of Holly’s boss at the party she hopes to use to salvage her career. In a way, this is a high-jinks book. There is lots of violence, but most of it takes place off-stage.

As expected in a well-written thriller, it’s usually unclear who’s doing what to whom and why. When Freddy’s former mentor Thomas Veil shows up to offer him a way out of his dead-beat job, all the loose ends – Mexico, the spy shot dead in the theater by a gunman wearing a clown mask, and the head and hands of another spook left in Freddy’s fridge – all come together in a very satisfying denouement.

For more Smashwords recommendations like Make a Move visit www.greatbooksunder5.blogspot.com

This is a marvellous piece of post-slacker Beat-style prose that draws the reader in and keeps them in its languid grasp till the end. Marvellous

As well as a story which underpins serious action with serious ideas, we have the sense that the setting itself almost emerges as a character. Paris is brilliantly evoked through its citizens such as M. Vasseur the baker, its dirt and its grime and its landmarks and restaurants. As with the characters, Paris is shown with the good and the ugly side by side.
Read this book with care. it is a good page turner but is much more than that.

Make a Move is like a road movie without the road. The plot, like the main characters, is deceptively easy going which makes this a real page turner that launches you into a thrilling finale. A really good read.

Make A Move combines a brisk narrative with rounded character development, all interwoven within an intelligent plot. Engagingly written, it offers a clever nod to the thrillers of yesteryear bringing the genre slap bang up to date with contemporary references that any discerning reader will greet with a knowing smile. The relentless pace will have you frantically scrolling through the pages eager to reach the next gripping installment – in short it is the first electronic page-turner.
Do yourself a favor, Make A Move and click purchase!

(reviewed the day of purchase)
Julie Cunningham reviewed on April 19, 2010

This book is funny, clever and authentic in a way that welcomes you to Paris and buys the first round of margaritas. The story draws you in as you follow the characters along café-lined streets (and a few strip-club-lined ones too) showcasing some of Paris' well-known quartiers and monuments along the way.

As Freddy is dragged once again into the realms of spy work, I felt 100% behind him throughout the action. He delivers with dexterity, but always endeavours to maintain his own values and strives to uphold a level of decency despite the actions of those around him.

From the moment I was introduced to Freddy's mischievous friend Jay, not only was I smitten with him, but I felt transported into a world of serious entertainment. Jay doesn't shy away from trouble, in fact, he actively encourages it and with the help of his friends, he resolves the tricky situations he finds himself in spectacularly. I was delighted by his many naughty antics, which are described deliciously throughout the book.

You feel warmed by the heartfelt friendship between Freddy, Jay and Holly as the story develops. The three friends each have their own demons to face, but they support, encourage and enable each other to accomplish and achieve with sparkle and spirit.

I love Make a Move because it gives you a youthful sense of empowerment as its wickedly entertaining storyline unfolds. With powerful visuals, high-energy action and sly, quirky and beautiful characters - this book is crying out to be made into a TV series!

I don't usually read spy stories, but this one grabbed me from the start, perhaps because it isn't really about espionage so much as it's a story about friendship. The episodic writing style moves the story along at a quick pace and gives it an unusual flavour, and I mean unusual in a really good way. I found I often laughed out loud as I read, and I kept reading on and on, unwilling to put the book down, and eager to find out what would happen next. The characters jump to life in your mind, becoming so real that you're utterly committed to them and their exploits - so much so that I even found I fancied one of them by the end. I know. A fictional guy in a book. That hasn't happened to me since Pride & Prejudice...

There's just the right balance of fun, action and character development, and don't let the childish humour fool you into thinking this isn't a smart book. It is. I loved it.

This is a good, fun book that keeps your attention throughout; fast-paced, easy to read, dialogue to die for, and with just the right level of stripshow-seediness and ultra-violence. The black humour that permeates each page produces anything from a wry smile to belly laughs. The episodic structure is borrowed from countless TV shows but is novel in a novel, and like all good TV shows, each episode will keep you coming back for the next. I can't wait for season 2.

You have subscribed to alerts for Steven Gaskin.

You have been added to Steven Gaskin's favorite list.

You can also sign-up to receive email notifications whenever Steven Gaskin releases a new book.