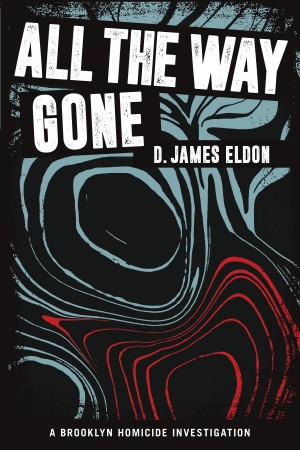 All The Way Gone

Rated 3.75/5 based on 4 reviews
When Jack Turner's wife disappears, the police suspect he may be involved. The story turns on a series of seemingly unconnected events. Things become complicated as the two detectives assigned to the case begin following different threads, leading them in opposite directions.

All The Way Gone will hold your attention from the first page to the last. You won't be able to put it down. More
Imagine your wife disappears. When the police get involved you find yourself thrust into a world where everything you thought you knew about yourself was wrong, and the lies you've been living have caught up to you. Do you deny the truth or lose yourself to your demons?

This is Jack Turner's nightmare. This is All The Way Gone.

With the police suspecting him, Turner learns you can never outrun yourself. The story turns on a series of seemingly unconnected events. Things become complicated as the two detectives assigned to the case begin following different threads, leading them in opposite directions.

Can these men who've worked together for years survive their differences and come together to solve the case? Is Jack Turner involved in his wife's disappearance? More importantly, will they find her in time?

A native New Yorker, D. James Eldon has been writing fiction and poetry for more than 25 years.

After barely finishing high school, he chose to drink heavily and skip the college classes his friends were attending to join the Navy (which lasted all of 6 months). Returning to NYC he studied acting while working as a bouncer, then a waiter (possibly the worst waiter ever to have worked in a 3-star restaurant), and finally a bartender.

After cheating death more than once, he quit drinking, quit working in bars, and found himself an office gig. Having more clear-headed time on his hands then he knew what to do with - he went back and read all those books he'd skipped in school, falling in love with authors, such as Don DeLillo, Paul Auster, Michael Ondaatje, the poetry of Pablo Neruda, and the short stories of Hemingway and Raymond Carver.

Driven to express himself creatively, he began writing short stories and poetry, which he found infinitely more enjoyable and satisfying than acting. He gave up acting and spent his free time writing.

After many years of writing and supporting himself in the technology field, he quit working in the corporate world and began writing his first novel.

In 2006, he left NYC on a cross-country motorcycle trip. Though originally planning to return to NYC in a few weeks, he instead spent 4 years traveling the west on motorcycle and working odd jobs while continuing to write.

He returned to NYC in 2010 and began work on BROOKLYN HEAT, the follow-up to All The Way Gone.

In 2015 he returned to Los Angeles where, in 2016, he completed Brooklyn Heat and began work on the third novel in the Brooklyn Homicide Series.

Check out his poetry blog at www.disposablepoetry.com

About the Series: Brooklyn Homicide Investigations

The Brooklyn Homicide Investigations are a series of books that take place in and around Brooklyn, NY. Using the same veteran homicide detectives and a different high-profile case in each book, the series progresses through the personal and professional lives of the detectives while tackling questions about life, death, work, and relationships under the pressure of trying to do the right thing inside a massive bureaucratic system.

Reviews of All The Way Gone by D. James Eldon

Good story about a missing woman. We follow the police on their search for the missing woman, get to know her husband, and are given glimpses of her situation.
I really liked the story, it keeps you reading because you want to know what is going to happen. The story begins with different plot-lines that seem unrelated, but they come together nicely and in the end form a coherent whole. The characters are built up nicely and you really get the feeling that you know these people, they are very lifelike.
Does contain graphic descriptions of sex and some strong language, so not a book for people who find this unpleasant.

I won this book through Library things member giveaway to give an honest review. I felt the chapters jumped around a lot, from character to character, until I had no idea what was really going on in the story. It also bugged me that for some reason it kept going from single spacing to double spacing, not the authors fault I'm sure. The basic story was good, but could have become more cohesive earlier on. The ending was quite a twist, but sort of left me wondering, what is going on. Very confusing, not enough info given with respect to the victim and why it happened. Was she his wife or something else? Did not like some of the graphic sexual deviant parts.

Won this book from the author. It was a fast paced thriller. Found that I could not put it down. The only thing I didn't enjoy was it ended too quickly. Looking forward to the next book by this author.

(reviewed 22 days after purchase)
Wendy Justice reviewed on Sep. 20, 2012
(no rating)
I’ve never worked in law enforcement, but I imagine that this book was reasonably accurate in telling what it would be like to be a New York cop. In that respect, it was an OK book. The plot was loosely constructed around a businessman, Jack, who was jogging one morning with his wife, who mysteriously disappeared moments after Jack decided to run ahead and meet her at the end of the park. After finally deciding to take the missing persons report seriously, the police initially made Jack their top suspect. Jack doesn’t help matters when he tells no one at work about his wife’s disappearance and philanders about – certainly not typical behavior from a distraught husband.

What bothered me about this book was the terrible editing and grammatical errors that seemed to get worse as the book progressed. The word “it’s,” for example, is a contraction of “it is.” The author consistently used an apostrophe whenever the possessive form of the word, “its,” would have been correct. Then there was “they’re” and “their,” “loose” and “lose,” “then” and “than,” “quite” and “quiet.” Even worse was the use of “and” as a complete sentence – “I wanted to pull my hair out from all these errors. And.” Finally, the typeface alternated between serif and sans-serif, which seemed to have no purpose other than to distract the reader. This is all unfortunate, as it could have been a decent book if the author had either engaged the services of an editor or looked critically at his work (though authors are usually poor editors!) If an edited version of this book is released, then I would give it 4 stars. In its current form, it’s a 2-star book.

Disclosure: I was given a copy of All the Way Gone in exchange for writing a fair and honest review.

I liked this book. I’ve seen other reviews that have compared it to Gone Girl (which I haven’t read yet, but it is on my Nook waiting to be read). There were some scenes that I couldn’t really understand why the author had put them in there, how was it relating to the relationship between the wife and the husband and the ending. Sometimes you felt sorry for the husband, other times you felt like he deserved it. The ending was rather sad, but the author wrapped things up nicely.

I can definitely see the potential for spin-offs from this particular book, more into other cases that the police characters that we meet in the book could go into in the future.

You have subscribed to alerts for D. James Eldon.

You have been added to D. James Eldon's favorite list.

You can also sign-up to receive email notifications whenever D. James Eldon releases a new book.