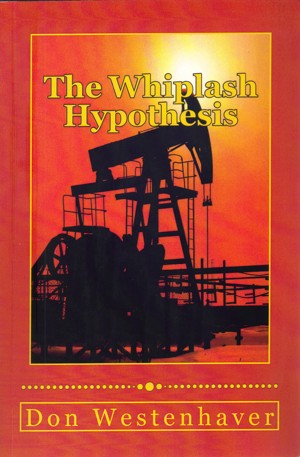 By Don Westenhaver
In 1967, Marine officer Sam Weber is sent on a top secret mission to destroy an enemy arms depot run by a wealthy Chinese named Sing Han. There Sam meets Sing Han’s daughter, Liang, who helps him escape. In 1984 Sam and Liang meet again and fall in love. Sing Han has been plotting for years to destroy the U.S economy by manipulating the global price of oil. Only Sam and Liang stand in his way. More
In the 1970’s the world experienced two oil shocks, as the price of oil rose from less than $2 a barrel to over $32. Early in 1986, in a three-month period, oil plummeted from $28 down to only $10. These violent fluctuations significantly altered the economies of virtually every nation on earth. When oil prices went up, they caused unprecedented inflation in the United States and changed forever the face of its industry and commerce. When oil fell back down, countries which export petroleum, such as Venezuela and Mexico, could no longer pay their debts, creating an international debt crisis. Economists cannot adequately explain how the price of oil swung up and then down as fast as it did. This novel poses a fictional explanation to that mystery, using actual characters and events as background for the fictional characters and plot.
The book begins in Vietnam in 1967. The CIA has developed intelligence that points to an arms supply base in Laos. It appears that the North Vietnamese Army troops are being supplied with weapons as they travel down the Ho Chi Minh Trail on their way to the southern cities of Hue, Danang, Nha Trang and Saigon. A U.S. Marine lieutenant, Sam Weber, is sent on a covert mission to find the base and destroy it. He and a small team parachute into the area, and soon all are killed but Sam. Wounded and imprisoned at the supply base, he is cared for by Liang, the daughter of Sing Han, a Chinese who operates the base. With her father away for a few days, Liang and Sam fall in love, and she helps him escape. They promise to meet again at her home in Hue.
But in the chaos of war, Sam is unable to locate Liang. He returns to the United States, becoming an oil company executive in Southern California. Liang immigrates to the United States, obtaining a college degree at Berkeley. She forms a successful electronics company, and then later is persuaded by her father to buy an oil services company.
Sing Han, based in Hong Kong and Singapore, builds up a new business empire in banking, real estate, and oil. He becomes partners with Manuel Carvalho, president of a fictitious Latin American country called Esperanca, and contracts to export that country’s oil to international buyers. Esperanca, once destitute, becomes a major oil power as prices increase to over $30 a barrel.
Sing Han has also cultivated an American politician named Clay Josephson, aware that he is the son of the U.S. government agent who unwittingly let Sing Han’s family die in Shanghai. Through bribery and blackmail, and ignorant of Sing Han’s connection to his father, Clay becomes his puppet.
After seventeen years, in 1984, Sam and Liang meet by chance and fall in love all over again. All goes well until a murder pulls them into Sing Han’s elaborate plot to bring the United States to its knees. He plans to use Esperanca and Clay Josephson to drive the price of oil below $10, causing the formation of a Latin American debtors’ cartel. This will give the countries the strength to renege on over three hundred billion dollars of debt, causing widespread banking failures and economic chaos in the United States.
As the climax approaches, Sam and Liang travel to Esperanca to try to prevent Sing Han’s plot from succeeding. The final chapters increase in drama as the two work behind the scenes to block the formation of the cartel and then escape from Esperanca as the country bursts into civil war.

As a boy I planned to become a Catholic priest, but I dropped out of the seminary because I didn’t want someone else controlling my life. Making the same mistake a second time, I enlisted in the Marine Corps. The Marines trained me to be a Vietnamese interpreter, so I expected to be assigned to a glamorous intelligence unit. When I landed in Vietnam in April 1967 the USMC assigned me to an infantry company near the DMZ. They didn’t need an interpreter and gave me a rifle and a radio to haul through the jungle. I was quickly promoted to sergeant because the more senior radiomen kept getting shot.

Back in the USA I finished college and became a finance executive in the oil industry, traveling frequently to Asia, Europe, Latin America and Africa. The travels expanded my view of the world and made me appreciate other cultural values. Paradoxically I also learned to appreciate the United States more. It is the best country on earth, but there are things we can learn from others. After the oil business I moved to Nissan’s national headquarters, where I remained until retirement.

I have been married to my wife Ellie for over 40 years. We live in Southern California and have two grown daughters and two grandchildren. We are retired and spend much of our time assisting four different charities. We also love traveling, reading, golfing, and of course hanging out with the grandkids. I am a member of the Southern California Writers Association and the Military Writers Society of America.

You have subscribed to alerts for Don Westenhaver.

You have been added to Don Westenhaver's favorite list.

You can also sign-up to receive email notifications whenever Don Westenhaver releases a new book.