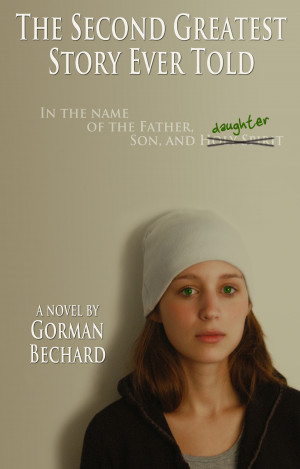 The Second Greatest Story Ever Told

By Gorman Bechard
God sends his Daughter to save the world...only problem, she's a typical teen, into sex, booze and rock n' roll. But we will only be better for it! The Los Angeles Times called this "a very very funny book." More
The world has problems! And no one knows that better than God. (He sees everything, remember?) He decides it's time for that ultimate wake-up call. Only this go-round, the Big Man is giving his Daughter a shot. Her name is Ilona. She's 18, lives in the East Village, listens to alternative music, dates, drinks, and has no problem telling the Pope and the President that they better get their act together...pronto! But like every Savior, Ilona has a deadline. She needs to get her message (the 11th commandment: "Be Kind") across now. And what better way than through the media. She becomes a sensation, promoting her word on various talk shows, and from her vantage point on the cover of every magazine. Ilona is the new "It" girl, the messiah for the X-Generation: cool, quirky, and sexy. And as Jesus Christ's kid sister, she's not about to take any crap from the men who've been running the show. As with her Brother before her, there are the doubters amongst us. People who feel that God has no right rewriting the Bible and that Ilona is the black sheep of the Holy Family. But God is not about to stand by and watch as his little girl is "crucified." He's had enough of the hypocrisy, and takes out a little revenge on those who refuse to believe...opening the door for Ilona to work her divine magic. THE SECOND GREATEST STORY EVER TOLD is a comic gem of a tale, reminiscent of the work of Nick Hornby, Tom Perrotta, and Kurt Vonnegut, which the New York Times called "an irreverent look at the Second Coming" while the Los Angeles Times said it was "a very very funny book." Hip, enchanting and life affirming, like a female "The Catcher in the Rye," THE SECOND GREATEST STORY EVER TOLD tackles all the big issues: Good, Evil, and Rock 'n' Roll.
Available ebook formats: epub mobi pdf rtf lrf pdb txt html
First 10% Sample: epub mobi (Kindle) lrf more Online Reader
pdb
Price: $4.99 USD
Buy Add to Library Give as a Gift
How gifting works
Create Widget
Tags: comedy religion jesus second coming liberal chic lit female catcher in the rye
About Gorman Bechard

Gorman Bechard is the director of the critically acclaimed rock documentary COLOR ME OBSESSED, A FILM ABOUT THE REPLACEMENTS, which Rolling Stone called on of "the seven best new music documentaries of the year," and the Village Voice dubbed, "The rock version of Rashomon." The film has screened in festivals, rock clubs, indie cinemas throughout the world, and even the Rock & Roll Hall of Fame, before being released on DVD and hitting the top ten of the Billboard charts in 2012.

Bechard's last rock documentary, WHO IS LYDIA LOVELESS? follows the rising star of the cow-punk songstress as she tours and records her fourth album. The film premiered at festivals in Spring 2016 and will be released on DVD on November 24th, 2017.

He also directed the documentary A DOG NAMED GUCCI, a film which takes a look at domestic animal abuse in the U.S., told though the story of one man and one dog who changed Alabama's laws forever. A DOG NAMED GUCCI had its world premiere at the Big Sky Documentary Film Festival in 2015. Bechard was given the ASPCA’s Media Excellence Award for 2015 for his work on the film.

Bechard last narrative feature BROKEN SIDE OF TIME, a dark thriller set in the world of internet modeling, had its world premiere in June 2013. It is part two of his planned ALONE trilogy. It was released on DVD in May 2014.

Bechard is the filmmaker behind WHAT DID YOU EXPECT? THE ARCHERS OF LOAF LIVE AT CAT'S CRADLE, which had its World Premiere at NXNE, and EVERY EVERYTHING: THE MUSIC, LIFE & TIMES OF GRANT HART, a documentary on Hüsker Dü's infamous drummer/singer/songwriter premiered at London's prestigious Raindance Film Festival.

He also directed/wrote the indie features FRIENDS (WITH BENEFITS) (2009) and YOU ARE ALONE (2006), the horror comedy cult-classic PSYCHOS IN LOVE (1986), as well as the award winning shorts OBJECTS IN THE MIRROR ARE FURTHER THAN THEY APPEAR (2003) and THE PRETTY GIRL (2000).

All of the films are streaming on various outlets like iTunes, Hulu, Amazon Prime, and VOD.

The prolific Bechard currently has five feature documentaries in various stages of development, including WHERE ARE YOU, JAY BENNETT?

Bechard also is the author of five previous novels, THE SECOND GREATEST STORY EVER TOLD, UNWOUND (under the pseudonym Jonathan Baine), NINTH SQUARE, GOOD NEIGHBORS, and BALLS. He has just completed his sixth novel, LET IT BE, a literary deconstruction of the monumental fourth album from The Replacements.

He lives in New Haven, with his wife Kristine, and their two rock & roll dogs, Springsteen and Dylan.

Reviews of The Second Greatest Story Ever Told by Gorman Bechard

You have subscribed to alerts for Gorman Bechard.

You have been added to Gorman Bechard's favorite list.

You can also sign-up to receive email notifications whenever Gorman Bechard releases a new book.