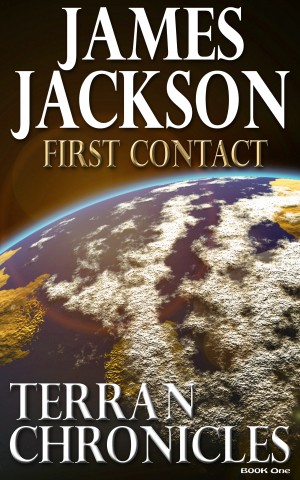 Earth's history is replete with examples of what happens when a powerful civilization meets a technologically inferior culture. The less advanced culture never comes away unaffected, at best they survive.

‘First Contact’ follows events around the world as we get to learn a little about the individuals that eventually form an intrepid core group. Through design and luck, these varied individuals find themselves working together. Some are military, some civilian, others we are not so sure what their roles are, just yet. Some of these people work with these alien visitors, others against, as is our way when faced with uncertainties.

I was born in Sydney Australia in 1965. I moved to Michigan USA in 2001. I have two wonderfull children,and one grandchild who all still reside in Sydney. I began writing the Terran Chronicles Saga in 2010. For a detailed bio please visit www.TerranChronicles.com

About the Series: Terran Chronicles

The Terran Chronicles Universe is a science fiction adventure series which begins in Earth's near future and spans far beyond.

Humanity discovers they are not alone in the Universe, and that space is perilous. However, things are not all they seem to be. Enemies become friends, while others prove to be dangerous beyond all measures of comprehension.

Welcome to the ‘Initiation Series’, the first series of the ‘Terran Chronicles Universe’.

A science-fiction wholly concerned with humanity’s first encounter with an alien race, First Contact is an interesting study into the human psychological response. The author uses a plot-driven story that spans numerous countries, environments, and people, while constructing a believable and yet mystifying alien race: the Gamin.

Numerous asteroids in space are soon suspected of being an alien attack and Earth finds itself paralysed and without response. Leaders of governments, motivated by self-interest, are in no cohesive shape to tackle the perceived threat…

First Contact starts with a detailed space battle, which was well-described and exciting; I felt I was really there, seeing the ships blast one another into submission using different tactics. The main narrative involved George Stanton, his wife and son. When George’s city is met with devastation, his family is left with nothing, until the Gamin aliens arrive with a massive spaceship, and then oddly start “recruiting” human workers. Wanting answers about the destruction of his city, George and his wife Lisa choose to work for the Gamin, whose alien ability to construct basic infrastructure is efficient. Through George, the reader sees Sharz, a Gamin, first hand. Sharz resembles George and Lisa in many ways, being kind, compassionate, and understanding. The Gamin relay messages through televisions to contact the human race directly. George’s perspective was what I liked most about First Contact because it focused purely on relations between humans and the Gamin.

First Contact is written in the present tense, and it took me a bit to get used to liking the style. It simplified some scenes and situations too much. However, further reading led me to conclude the tense wasn’t really the problem; it depended on the character and the focus of the plot. My enjoyment of First Contact was not consistent. There was a lot of explaining and many action scenes left my attention span wavering, especially with sub-characters Hayato and Radclyf. A lot of questions are posed about the Gamin, but few of them are answered. Most of the time, the reader is left with characters’ assumptions about Gamin motives, since they are not overtly hostile, social or co-operative.

When I had read 75% I realised that First Contact was extremely addictive and easy to read. The subject matter was very interesting, especially the ideas. Based on this fact, and my expectation that the sequel will be even better, I would certainly consider reading more from this author.

Just finished reading this book last night and I can't wait for the next one. If I had to describe the book in one word "INTRIGUING" would do it. Every page leaves you eager for the next, and every answer brings more questions. This is a book you just can't put down! I highly recommend it to anyone, not just sci-fi fans but to anyone who likes a well written, captivating story!

Fantastic storyline! Started reading and could not put it down! Anxiously waiting for the next book in the series!!

So much for bedtime reading! I was up ALL NIGHT reading it to the end. Hooked I think you call it :)

Loved how you presented the story and looking forward to your next novel. You're now on my watch list.

(reviewed the day of purchase)
Shannon Ostrander reviewed on Jan. 2, 2012

This is an amazing story. I can't wait for the rest of the series!