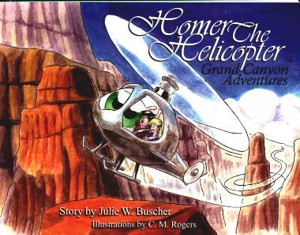 By Julie W. Buscher
A one of a kind tale of high-flying, rollicking misadventures!
HOMER is an educational, aviation-oriented tale, even teaching how to pilot a helicopter.
A hand-up book to teach children English language & vocabulary. This 72 page chapter book, 20 color illustrations, delights ages 6-10, adults young at heart, & the flying community. Hop on board,fasten your seatbelt, and prepare for a joy ride

I was born and raised in rural Central Utah. I graduated from LDS Business College, Salt Lake City, Utah; thereafter I worked as a secretary and also a paralegal secretary for many years, and am an experienced business writer. I’ve traveled the country, and lived in the western United States all my life.

1 - “Homer the Helicopter Grand Canyon Adventures” is my first book. A shorter version was selected as a finalist in Shamrock Publishing Co.’s 1997 children’s fiction contest.

3 - Homer the Helicopter Grand Canyon Adventures eBook was judged the 2007 winner in the ebook category of the Indie Excellence Awards by a panel of publishing experts in editing, marketing, publicity and design. The award is sponsored by Smarketing, LLC.
Homer eBook and printed book are duplicates of each other.

4 – I was invited by Experimental Aircraft Association to be one of their featured authors in “Authors’ Area” at the 2008 Airventure Convention, Oshkosh, WI, which convention I did attend.

My other interests include genealogy and playing the piano.

Presently, I live in Brighton, Colorado, with hubby, Charlie, a private pilot—(I myself a previous pinch-hitter pilot), where we fly his vintage Cessna 180 aircraft. My inspiration for writing Homer’s story came from my husband’s in-flight encounter when a bald eagle challenged Charlie’s small aircraft’s maneuvers.

Homer the Helicopter Grand Canyon Adventures
Homer, an emerald-eyed,little 'copter is "born" in the factory, and given to the wise Elsa to raise. But the mischievous Homer disobeys his mother by zigging and zagging in every direction. Instructor Hank teaches Homer the correct way to fly. Homer and Hank suffer a horrifying crash in the raging river! Instructor Jennie ultimately meets the wrecked 'copter and has him repaired. Under Jennie's tutelage Homer matures, graduating into An Air Ambulance Chopper.

You have subscribed to alerts for Julie W. Buscher.

You have been added to Julie W. Buscher's favorite list.

You can also sign-up to receive email notifications whenever Julie W. Buscher releases a new book.