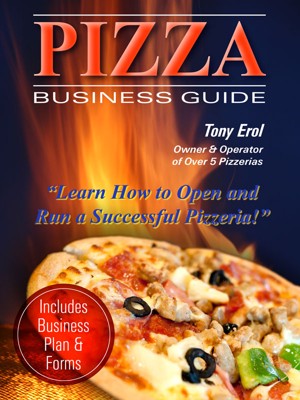 Use my knowledge and real life experience for your success. I am sharing everything that I know about the pizza business and how I became successful. You will learn my ideas and technique so you can implement them right away.
Available ebook formats: epub mobi pdf rtf lrf pdb txt html
Price: $49.99 USD
Buy Add to Library Give as a Gift
How gifting works
Create Widget
Tags: pizza pizzeria pizza business pizza book pizza business plan how to open a pizza shop
About Tony Erol

Tony Erol started working for restaurants when he was just 15 years old and continued to work as an employee until he opened his own. He was a founder of local pizza chain in Virginia and Maryland. He started his own company when he was 26 years old in a bankrupt pizzeria in a gas station in Germantown, Maryland; the pizzeria had been shut down twice for business before Tony took it over. After just one year, Tony made this place the busiest independent pizzeria in town. People couldn't relive they were eating the best pizza and submarine sandwiches in a gas station. By 2010, he had opened five restaurants in different shopping centers. In 2011, Tony sold his very successful pizza chain, He is in the process of opening a New York style Pizza Restaurant in two different locations. He hopes to make his next venture a franchise company.

Tony attend Pizza Expo Shows regularly, He has visited all over America from the East Coast to the West Coast- as well as all over Italy to find the perfect pizza. Tony has his own pizza blog and shares his pizza experiences.

Some excellent advice on buying an exisiting place to determine certain factors. Would have preferred more information on running a place instead of how to write business plans.

You have subscribed to Smashwords Alerts new release notifications for Tony Erol.

You have been added to Tony Erol's favorite list.

You can also sign-up to receive email notifications whenever Tony Erol releases a new book.