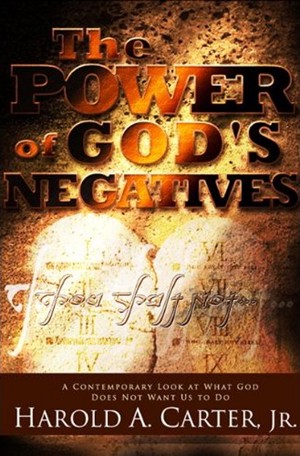 The Power of God's Negatives: A Contemporary Look at What God Does Not Want Us to Do

By Harold Carter, Jr.
Harold Carter uniquely takes biblical study, theology, psychology and spirituality and blends them with his own style of intellect, hermeneutics, anecdotes and, interestingly, the usage of many of life's axioms, and develops a fresh perspective on what it means to be obedient to God. Carter brings the reader into an appreciation of wanting to please God by being obedient to what God does not want.

... is a third generation preacher of the Gospel of Jesus Christ, having been licensed and ordained in the church of his upbringing (1980), the New Shiloh Baptist Church, Baltimore, Maryland.

... is married to Rev. Monique T. Carter, and they are the parents of two sons, Daniel Nathan and Timothy Alphonso. He is the son of Dr. and Mrs. (Also Dr.) Harold A. Carter and has one sister, Weptanomah Davis.

... is a graduate of Eastern College, St. Davids, Pennsylvania, earning a B.A. in English Literature/Writing and Religion...is a graduate of the Lancaster Theological Seminary, Lancaster, Pennsylvania, earning a Master of Divinity degree...is a graduate of the United Theological Seminary, Dayton, Ohio, earning the Doctor of Ministry degree, and among many honors and awards, he received the Doctor of Divinity degree from the Virginia Seminary and College, Lynchburg, Virginia, and the Doctor of Humane Letter from Cumberland College, Williamsburg, Kentucky. In 2006, he was inducted into Morehouse College, Atlanta, Georgia, as a Martin Luther King, Jr. Distinguished Preacher.

... is the pastor (since 1996) of the New Shiloh Baptist Church, Baltimore, Maryland, serving along with his father, Dr. Harold A. Carter. Together, they lead the congregation of more than 5,000 active members with emphasis on Missions, Evangelism, and Christian Education. His preaching is heard widely throughout this nation, and through radio, television and internet streaming broadcasts. He formerly pastored the First Baptist Church, Petersburg, Virginia, believed to be the oldest African-American Baptist congregation in America* (1989-1996) and the Zion Baptist Church, Reading, Pennsylvania (1983-1989).

... his ministry has taken him to such places as the Middle East, Romania, Panama, Trinidad, Korea, China, England, the Bahamas, and India, where he has also been privileged to share the Gospel. He sees his “call” to the ministry as “The Divine compulsion to do God’s will.”

... he has served on a number of boards and conferences. Presently, he serves as the Vice-President and New Testament/ Hermeneutics Professor for the Determined Biblical & Theological Institute of Baltimore, Maryland. He is also a Co-Mentor for doctoral candidate students at the United Theological Seminary, Dayton, Ohio. Additionally, he is the Co-chair of the Board of Directors of the New Shiloh Village Development Project, a non-profit organization with a goal of community development, including the New Shiloh Senior Living building (an 81-unit facility).

... as an outgrowth of his ministry, publications include: Jesus is Knocking at Your Door, Six Significant Sermons, The Sacred Marriage—Getting Started in Pastoral Ministry, The Burning Bush, (co-author), and Harold’s Hermeneutics: Volume One. Additionally, he has written several songs, three of which have been recorded and performed by New Shiloh’s Music Ministry, entitled “You Will Know,” “I Never Shall Forget to Praise Your Name,” and “Always.”

You have subscribed to alerts for Harold Carter, Jr..

You have been added to Harold Carter, Jr.'s favorite list.

You can also sign-up to receive email notifications whenever Harold Carter, Jr. releases a new book.