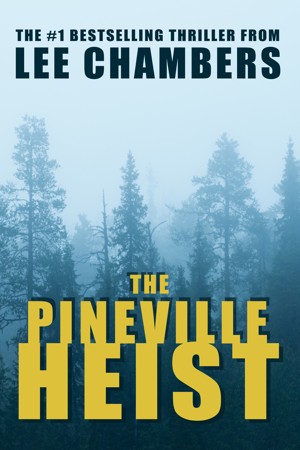 The Pineville Heist, based on the award-winning screenplay by Lee Chambers and Todd Gordon, "is a young adult thriller with a slick plot, believable characters, and a breakneck pace that will no doubt appeal to adults as much as teens," noted Walleye Magazine's Amy Jones. "An enthusiatic five stars!"

"The Pineville Heist is the very definition of thrill, energized with edge-of-your-seat action and suspense!" claims US Review of Books reviewer Mihir Shah.

I enjoyed every hour I spent into this brilliantly written novel. From beginning to end, the author is descriptive in every detail - the further I read, the more I anticipated.

Aaron played the main character and I was in love with him from the start. Rich, young, and ...I just know he's handsome. I was hoping he'd getting lucky with his young theater teacher.

I would classify 'The Pineville Heist' as "For mid-teenagers and older" because it included very few adult behavior. But truly, it was very readable and enjoyable and I took no offense to the adult behavior because it helped me to visualize what the characters were truly feeling.

If you are looking for suspense with frequent thrills and chills, The Pineville Heist is a great read. Definitely Five Stars.

(reviewed 5 days after purchase)
Paul Lappen reviewed on on March 13, 2012

This novel is about your average teenager caught in the wrong place at the wrong time. He might just pay with his life.

Pineville is a small town in Ontario that has seen better days. Its last remaining bit of industry, a mill, has been bought by Derek Stevens, a corporate-raider type. The expectation is that he will close the mill, turning Pineville into a ghost town. Anticipating your town's demise can make people do strange things. That makes Aaron, his son, not the most popular person at the local high school.

Cutting class one day, Aaron and a couple of friends head for the woods just beyond the high school, and come upon a bank robbery gone bad. Hiding under a canoe, Aaron sees a couple of the robbers shot point blank by an unknown person. Grabbing a knapsack full of money from the bank that was robbed, Aaron makes it back to the school. Steve, one of his freinds, wasn't so lucky.

The school day is over, so the school is deserted. Aaron runs into Miss Becker, his drama teacher, only a few years older than Aaron. She becomes convinced that he is telling the truth when "Mr. Big," the person who did the shooting, enters the school. He makes it clear that he wants the money, and that he does not plan to leave witnesses. Mr. Big has smashed the school's electrical circuit breakers, plunging the school into darkness. Earlier, the principal made the school a "no cell phone" area, so there is no way to call for help. They are also locked in for the evening.

The three fight several pitched battles all over the school. Every time Aaron and Miss Becker think that Mr. Big is no longer a threat, he wakes up, meaner and more upset than ever. Do Aaron and Miss becker survive the night? Is Mr. Big taken care of, once and for all?

I read the entire second half of this book in one sitting, it's that good. The book is somewhere in the process of being made into a movie. If it is anywhere near as thrilling as this novel, it is recommended for teens and adults.

(reviewed 22 days after purchase)
Susan Nickerson reviewed on on Jan. 5, 2012
(no rating)
Amazing!

You have subscribed to alerts for Lee Chambers.

You have been added to Lee Chambers's favorite list.

You can also sign-up to receive email notifications whenever Lee Chambers releases a new book.