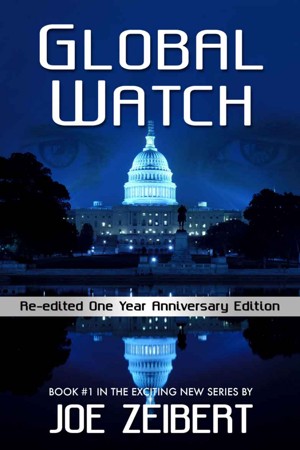 Global Watch is my first full length novel with two sequels already in the queue. The secret government agency, Global Watch, is headquartered outside of Washington D.C., where I was born and raised.

Growing up in Washington, D.C., I was fully immersed in the world of politics, government and business from a young age. My grandfather, Duke, and father, Randy, owned and operated Duke Zeibert’s Restaurant which was, as quoted by the New York Times, “the well-known gathering place for the politically connected.”

Numerous presidents and dozens of senators dined at Duke’s next to the three Super Bowl trophies won by the Washington Redskins, and on loan from Redskin’s Owner Jack Kent Cooke. It was at the restaurant that I watched Larry King hob nob with the political elite, and it was there that I had a chance to see Mikhail Gorbachev from a distance during the Cold War then later meet and take a picture with him after the fall of the Soviet Union.

These childhood experiences helped me shape the political characters on both the US and Russian sides of Global Watch. Once the basis of the story was formed, I drew on experiences from later in my life to help me develop themes of international business and advanced technology.

My MBA from Boston University helped me turn Global Watch into a realistic corporation, and permitted me to understand the economics behind what he was detailing. My Master of Science in Information Systems, also from BU, allowed me to blur the line between current feasible technology and next generation technology, so that the team at Global Watch could use gear and gadgets that are not currently around, but will likely be seen within the near future.

You have subscribed to alerts for Joe Zeibert.

You have been added to Joe Zeibert's favorite list.

You can also sign-up to receive email notifications whenever Joe Zeibert releases a new book.