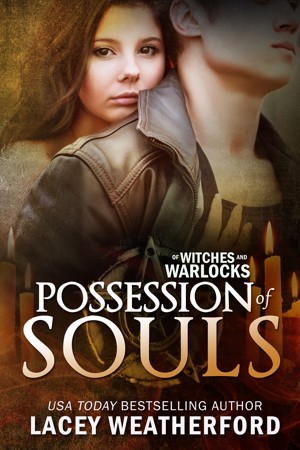 Of Witches and Warlocks: Possession of Souls

By Lacey Weatherford
Rated 5.00/5 based on 1 reviews
Fear.
Longing.
Bloodlust.
Desperation.
Ultimate Power.
Who will survive?
Of Witches and Warlocks: Possession of Souls More
Fear and desperation leave Portia and Vance clinging to threadbare hope as life is given, and taken away. Manipulated, driven by bloodlust and the desire to claim sole possession, the stakes are raised higher than they’ve ever been before. Evil rises with the intent to dominate, leading them and their coven to the ultimate confrontation—a battle which will force one of them to make a devastating, life-altering decision. Who will survive the final stand?

Lacey Weatherford was born in Ft. Meade Maryland while her father was serving in the military. She has been a life long resident of Arizona, spending most of her time growing up in the small rural town of Clay Springs.

It was while she was attending the small country school in Clay Springs, that she read her first "big" book at the age of eight. It was a Nancy Drew novel and Lacey was instantly hooked. She read every book that she could find in the series and decided that she wanted to write stories too.

Lacey spent a lot of time at the library from that time forward, even volunteering in her later teen years and early twenties. She would don a crazy clown outfit for the Friends of the Library fundraisers in an effort to help get the new town library built.

When she and her husband moved away from the area, Lacey took the opportunity to take some creative writing classes at the local college to help further along her interests. Several years later, they were blessed with the opportunity to move back to Clay Springs with their family. The town had finally succeeded in building their library and Lacey had the opportunity to be President of the Friends of the Library for a very short time, before relocating.

Lacey and her family still live in the White Mountains of Arizona, where she continues to write young adult novels that have a fantasy/fairytale or paranormal bent to them, as well as being sure to include a great romantic storyline

Also in Series: Of Witches and Warlocks

An absolutely awesome ending to a fantastic series. I do not usually read Y/A, but I am happy I did for a change. Lacey Weatherford has now joined my short list of authors who are an automatic buy whenever a new work is published. I highly recommend her!

You have subscribed to alerts for Lacey Weatherford.

You have been added to Lacey Weatherford's favorite list.

You can also sign-up to receive email notifications whenever Lacey Weatherford releases a new book.