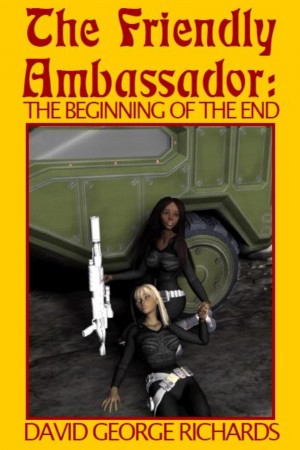 The Friendly Ambassador: The Beginning of the End

By David George Richards
Rated 3.00/5 based on 1 reviews
“The Friendly Ambassador” series blends Greek Myth with traditional Science-Fiction, taking a different approach to the legend of Atlantis, the origination of the Amazons, and the true nature of mythical creatures such as the Cyclops and Centaurs as aliens from other worlds. The story features aliens, war and mayhem on a grand scale. It’s not for the squeamish. Even the women are dangerous. More
As private secretary to Li-Sen-Tot, the Tun-Sho-Lok Ambassador on Eden, Gusta knew how badly the war was going. But when the treaty her government had signed with the Keruh was broken, even she was unprepared for the unimaginable savagery that followed. And with her children lost in the city, escape seems impossible.

As two mighty fleets gather for the coming battle in space, Anaxilea begins the bombardment of Eden with a heavy heart. She feels no anger towards the Edenites, but the Keruh Host was now on Eden, and the Edenites would not escape from the fate that awaited them.

The Atlantian Senate feared that a similar fate would overtake their world. But Ares knew differently. What the Tun-Sho-Lok scientist, Kel-Cid-An had created at Ephesus was a genetic masterpiece, the perfect warrior. But could these fighting clones be produced in enough numbers to defeat the Keruh?

Also in Series: The Friendly Ambassador

It is a very broad and crowded canvass that the author has presented here, as if one had mashed several episodes from all of the Star Trek series. The first volume ends after over one hundred and thirty thousand words with no resolution of the story, merely a pause. The four alien species plus a bio-engineered race of fighting creatures, programmed yet sentient, have fought to a point where the author takes breather. Those who enjoy fight scenes will find much to enjoy even if the notion of ships in space actually ramming each other seems somewhat off. One might also quibble at some of the spelling and words chosen. One would complain more loudly about the lack of a big picture; somewhere around chapter 12 of 20 there does seem to be one. I like action thrillers and there is plenty of action in this book but I miss a coherent view of the why, the mission, for all this.