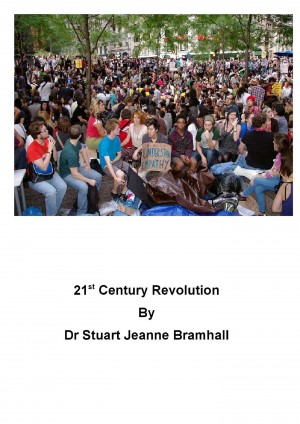 By Dr Stuart Jeanne Bramhall
Rated 5.00/5 based on 1 review
A collection of essays about real political change, the kind where the 99% overthrow the corporate elites who have seized control of our so-called democracies. In addition to heralding undreamed of political upheaval, the last two years have inspired new hope of taking back power from multinational corporations. Cover photo by David Shankbone via Wikimedia Commons. More
The book is divided into six parts. The first, “Occupy Wall Street and the New Economics,” discusses class divisions in the Occupy movement, as well as examining issues Occupy brought to light regarding our broken banking and monetary system. Part II, “My New Life in New Zealand,” discusses my reasons for emigrating and the political and social features that make my new home uniquely different from the US. Part III, “Capitalism’s Last Gasp,” examines the train wreck global capitalism has imposed on the planet. Part IV, “Psychological Oppression: the Role of Corporate Media,” talks about the role of the mainstream media in shaping the American psyche and preserving the status quo. Part V, “Change Making,” explores how I believe real change is likely to come about, with special emphasis on social class and strategies for reclaiming “the commons." It includes two essays about progressives (such as myself) who oppose gun control. Part VI, “The Endgame,” makes a few predictions about post-capitalist society.
Download: epub mobi (Kindle) pdf more Online Reader
lrf pdb txt
Price: Free! USD
Add to Library
Create Widget
Tags: libertarianism socialism anarchism activism censorship pharma industry anticapitalism corporate media occupywallstreet occupy wall street
About Dr Stuart Jeanne Bramhall

I'm a 66 year psychiatrist, single mother and activist who emigrated from Seattle to New Zealand in 2002. This followed fifteen years of intensive personal harassment by the U.S. government for my political activities. I write about this in my recent memoir The Most Revolutionary Act: Memoir of an American Refugee.

This book is broken into six parts. The first examining the ‘Occupy Movement’ and what instigated such activism. The author, Dr Bramhall goes onto outline some of the challenges that such movements face and draws upon her vast knowledge and experience in dealing with such activist organisations. Demographic and psychological constraints that hamper such movements are eloquently explained and illustrate why the coordination of such causes are difficult to maintain traction. While the second part of first chapter focuses on capitalism and how it has hit the wall. Drawing from various other authors’, Dr Bramhall goes onto outline how economic growth is not possible due to resource depletion and the Ponzi style structure of growth based systems. A detailed debunking of the debt based crisis in the US and global economies make this a fascinating reading.

The second section is a raw account of the author’s experiences as an expat American living in New Zealand. This self-examination of the similarities and differences between New Zealand and the US explain why many New Zealanders suffer from low wages and high living costs.
The third section aptly named ‘Capitalisms Last Grasp’ looks at the current economic crisis and implications for the future. Some of the reforms that have swept American schools, prisons, food industry and medical systems are alarming to the uninitiated reader.

The fourth section of this fascinating read examines the psychological oppression and the role corporate media plays in seducing and manipulating individuals to consume and make decisions that are in favour of the corporate elite. This chapter highlights some of the lesser known bailouts that have gone largely unnoticed in the mainstream. A disturbing example is the twelve point five billion dollar taxpayer funded loans between December 2007 and July 2010.
The fifth section of 21st Century Revolution brings to light how the second American Revolution may unfold, with reference to some of the lessons history holds for any positive move forward. The final section looks at what a post capitalist system world might look like, with discussion around population growth, resource depletion, human nature and land ownership.

This well researched and eye opening account of some of the social and economic issues that nations are faced with is a must read for those wishing to understand some of the broader issues at hand. After reading a 21st Century Revolution you will walk away wiser and with a clearer understanding of what it takes to move toward a sustainable and more egalitarian future

Would you like to favorite Dr Stuart Jeanne Bramhall?

You have been added to Dr Stuart Jeanne Bramhall's favorite list.