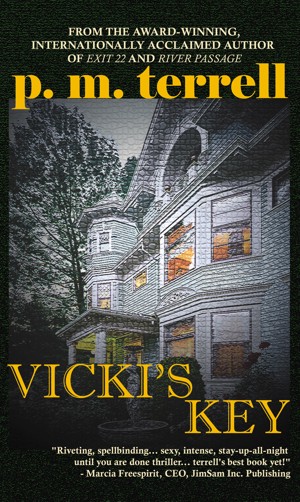 Vicki’s Key is the second in the “Black Swamp” series — but, happily, I didn’t feel that disconnect that sometimes occurs when starting a series out of sequence.

Terrell writes with authority, and with solid grounding in sufficient research, so that I felt confident in being taken hither and thither in the world she created. Her narrative is clearly drawn, using a broad palette of colors — from verdant and humid North Carolina to dusty, arid Afghanistan. Rather than following a single thread, menace and mysteries converged from several points — which made for a very enjoyable read.

This story centers around Vicki Boyd and her attempt to divorce herself from an especially traumatic event experience while serving with the CIA. She’s chosen to escape to a low-stress job in North Carolina, to allow herself the time and quiet to decide what her post-CIA life will look like.

She has an exceptional gift which takes the tale into the realm of the paranormal, but Terrell handles it gracefully and matter-of-factly, in a way that enhances the story and adds terrific richness. An unexpected romance enters the picture as well — along with a whole other set of intriguing unknowns. I was quickly hooked and drawn in, having to know what would happen next.

Her writing is well-crafted and edited. Terrell is a new find, and I plan on picking up more of her books.

*Reviewed after receiving free book from author for honest review.*

You have subscribed to Smashwords Alerts new release notifications for P.M. Terrell.