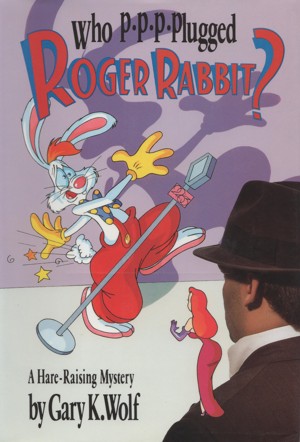 Who P-p-p-plugged Roger Rabbit? opens with a call from Roger to hard-boiled private eye Eddie Valiant. Roger suspects that Jessica is baking her carrot cakes for movie heartthrob Clark Gable. The scandal threatens to rob Roger of the Rhett Butler role in the soon-to-be-filmed Toon musical comedy Gone with the Wind. Investigating Jessica’s alleged affair, valiant Eddie finds adultery turning to murder. In no time flat, he’s up to his fedora in a nasty web of deceit, intrigue, and Hollywood corruption including reports from all over of a swindling, cheating, blackmailing….Roger!!?!?! Something is really p-p-p-popping in Toontown!

Who P-p-p-plugged Roger Rabbit? is a comically brilliant sequel, as unique and original as the first time we saw Roger and Jessica together in Wolf’s Who Censored Roger Rabbit?, the book that kicked off the whole Toon craze.

As the celebrated author of the novel Who Censored Roger Rabbit?, Gary K. Wolf gained fame when his literary vision of humans cohabitating with animated characters became a reality in the $750 million blockbuster Disney/Spielberg film Who Framed Roger Rabbit. The film won four Academy Awards and launched a multiple-picture screen writing deal for Wolf with Walt Disney Pictures. In addition, his ideas inspired Toontown, the newest themed land at Disneyland and Tokyo Disneyland.

He is now a full time science fiction novelist and screenwriter.

Reviews of Who P-p-p-plugged Roger Rabbit? by Gary K. Wolf

A fun story, while it is a sequel it stands alone well.

A fun sequel to the first Roger Rabbit novel mixing it up with Gone With the Wind, Toontown and a crazy mystery.

(reviewed 7 months after purchase)
Sharon E. Cathcart reviewed on May 21, 2011

It's not often that you get a chance to say this, but the sophomore entry in Gary K. Wolf's Roger Rabbit series surpasses the original!

In this well-constructed hard-boiled detective novel, Eddie Valiant is hired by David O. Selznick to find a valuable box that was heisted from his office during interviews with potential leads in "Gone With the Wind." The two prime contenders? Roger Rabbit and Clark Gable.

Of course, Jessica Rabbit is under consideration for the role of Scarlett O'Hara.

With the good humor and hard edge that were so cleverly combined in "Who Framed Roger Rabbit," Wolf has brought another winner to the field. There are more twists to this story than a Silly Straw, and it's a great read from beginning to end.

You have subscribed to Smashwords Alerts new release notifications for Gary K. Wolf.

You have been added to Gary K. Wolf's favorite list.

You can also sign-up to receive email notifications whenever Gary K. Wolf releases a new book.