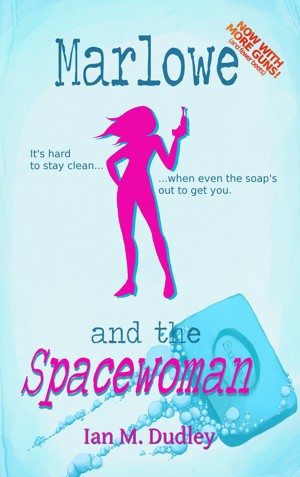 By Ian M. Dudley
Rated 4.00/5 based on 3 reviews
Obsoleted by technological advances, a clone intended for spare parts attempts to avoid death by proving a woman who crashed to Earth is indeed from outer space.

Marlowe and the Spacewoman is a sci-fi satire about Marlowe, a private eye recovering from his own murder, and Nina, a purported spacewoman whose arrival has caused ripples amongst the political elite.

Can Marlowe save both their lives? More
For Marlowe, an over-worked and oft worked over private eye recovering from yet another emergency resurrection, it's the start of a long day. He's murdered by a bar of sentient soap in the morning, and just when he's recovered enough to grab some lunch, a femme fatale crash-lands outside the City, causing a major political disturbance.

Forced by the government to investigate her claims to be from outer space, Marlowe struggles to strike a balance between solving his own murder and resisting his attraction to the alleged yet alluring extraterrestrial. All while dodging additional assassination attempts and the meddling of powerful figures who have their own ideas about how the 'Affair with the Spacewoman' should end.

Ian M. Dudley was born in California in 19--, in what will undoubtedly go down in the history books as a dark year indeed for literature. At age 18, he ran away to New York City to find fame and glamor in the New York literary world. He didn't.

Ian has written numerous unpublished works of fiction and non-fiction, the titles of which are too terrible to duplicate here, except for The Killer Party: How to Host A Murder Mystery. The promotional activities for that book led to his incarceration in 1993 in the New York Municipal Hospital for the Criminally Insane.

Also in Series: Marlowe and the Spacewoman

Likeable characters, an array of sentient household items and genetical engineering gone awry. What's not to like? A very funny read.

This witty dark comedy sci-fi it follows Marlowe, a Private Investigator, in his search, not only for his own murderer but proof the woman in his custody is from outer space and both their lives depend on the answer.

The world is Earth, sometime in the future, when the USA is now a collection of bickering warlord-led City-states, the Internet is illegal, Brussels sprouts are the staple diet, even the soap is out to get you and genetically modified parrots are Public Enemy Number One, a dark world indeed! There are subtle nods to a collection of other sci-fi books, if you can spot them, cleverly woven into the main story and the pace of the story keeps up throughout.

Marlowe is likeable character with an unpleasant past, but resourceful, brave, if cynical, and quite complex. His array of gadgets and AI style sidekicks, including House who is the sarcastic supercomputer who runs the house and many of his other gadgets, and brilliantly done. He was definitely my favourite character.

Nina is amusing, finding her way in the world of the future and realising the stupidity of some of the laws. She is a feisty, no-nonsense character out to prove her story, certainly NOT a girl in need of rescue.

The twist at the end is unexpected, witty and left open enough to be a cliff-hanger with a few other delicious hooks for later books scattered within.
All in all a good and enjoyable read with great characters and a darkly amusing world, which leave the reader hungry for more. I will certainly look out for other books by this author.

This was an entertaining read! The action is fast-paced and the humour well thought out - it put me in mind of the 'Stainless Steel Rat' books of Harry Harrison. The twist at ending came a bit out of the blue, but set up the promised sequel quite nicely.

You have subscribed to alerts for Ian M. Dudley.

You have been added to Ian M. Dudley's favorite list.

You can also sign-up to receive email notifications whenever Ian M. Dudley releases a new book.