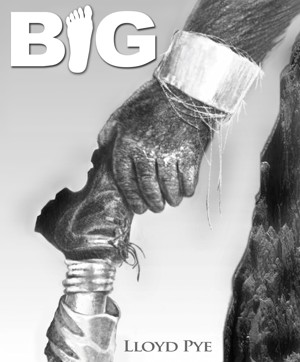 By Lloyd Pye
Rated 4.77/5 based on 13 reviews
A bigfoot is wounded by a shotgun blast. It exacts revenge, then tries to escape. It loses too much blood and collapses in deep woods, where it is found by high school senior Marcy Dillon. Marcy befriends it and decides to help it elude a posse gathered to capture or kill it. What results is a pulse-pounding, white-knuckle chase onto a deadly mountain, where both their lives hang in the balance. More
The story unfolds in the mountains of Washington State, where bigfoot sightings occur regularly.

It begins with a hunter encountering and then wounding a bigfoot with a shotgun blast to its upper back. Shot, bleeding, but not quite dead, the bigfoot passes out beside a stream deep in the woods. It is discovered by Marcy Dillon, a high school senior who intends to go to medical school. She has gone to the stream to gather herbs for an important school project.

As Marcy approaches the bigfoot, it revives and is rightfully terrified of her, but it is too weak to harm her. Given the reprieve, she manages to convince it that she wants to help it, not harm it any further.

Marcy is a small-town girl with big-town, world-class abilities, and she assumes responsibility for helping the bigfoot recover enough strength and stamina to return to wherever it came from.
She proceeds to feed it, then prepares a poultice pack of herbs to stop the wound’s bleeding, and to help it heal. She then returns home to get help from her father and boyfriend.

What Marcy does not realize is that the hunter who shot the bigfoot returned to their isolated hometown, and the bigfoot tracked him down to exact revenge. Now everyone in the town knows a seriously wounded bigfoot is somewhere up in the forested mountains surrounding them.

If the bigfoot can be successfully recovered, dead or alive, it will be worth a fortune in earned income and publicity for their isolated area. A large posse of local men is gathered to begin the hunt in earnest. That posse includes Marcy’s father and boyfriend, both of whom she tries to dissuade from going, but both refuse.

Her advantage is that she knows precisely where the bigfoot is, so she sneaks away ahead of the posse and rouses him, prodding him to get him up and moving beyond the reach of the posse and their relentless hunting dogs.

It will be a life-and-death race for the bigfoot, but soon after their journey begins, it becomes life-and-death for Marcy, too. Now, however, she has no choice but to continue onward to meet whatever fate has in store for both of them.

The final leg of the chase takes Marcy and her charge out the very edge of mental and physical hardship, and without incredible courage and tenacity on both their parts, they would not stand a chance. And then, when it seems as if they might prevail against the odds stacked so high against them, the very worst happens.

Lloyd Pye has been writing professionally for over three decades. His early career was in fiction, but in 1997 he switched emphasis to nonfiction. He has become widely known for his writing and lectures relating to alternative science and other forms of alternative knowledge. He lectures around the world, and has been interviewed on TV in a dozen countries.

Reviews of Big by Lloyd Pye

I have just finished reading BIG by Lloyd Pye I found a good read very hard to put down until the end.I have been interested in Bigfoot for about 30 years and this is the first book that I think is the most logical. I recomend it to anyone who has an interest in this subject.

A terrific read, a real page turner, how Harry and the Hendersons got made into a Movie and a damn silly one at that, and this didn,t, is a crime , I hope Lloyd Pye writes a sequel, its left me hungry for more, c'mon Lloyd what happens next ?

I absolutely enjoyed this book! Found it well written and definitely kept my attention.
Would very much like to buy a hard copy version of this.

Damn, this was as good a book as I have read about Bigfoot and boy have I read a lot of them. Lloyd did a great job on this, it could not have been better. Keep them coming if you write any more. Darrell Dawson, Madison, NE BFRO

I really enjoyed this story and read the entire book within 48 hours of purchase. The character development is very good, but what I liked most was the completely different approach/perspective to a BigFoot story. I am a new Pye fan, having only recently discovered his works...now I'm hooked and want more. I recommend BIG to everyone.

I enjoyed this book - perhaps not as much as other reviewers! - but it was an exciting page-turner and just as good, if not better, than many in a similar genre. Other reviewers are right that the characters are very real and well-rounded. So what stopped me giving four or five stars? Well, at points I felt the story went 'off the boil', for example when Marcy had to stop and help her mum get dinner ready - it seemed like the urgency was lost - I kept thinking about Big up there in the woods but Marcy seemed to have forgotten all about him!

The other minor grumble where the story could have been improved was the pervading acceptance on the part of all the characters of the self-evident existence of bigfoots (bigfeet?!). Now, I retain an open mind about these things but I think the story would have been strengthened if there was a character who was similarly sceptical (along with the orthodox view), which would have given me a way in to suspend this scepticism.

But overall, a good read with only a very few typos (unfortunately all too present in so many e-books).

Lloyd Pye writes in the genre of Michael Crichton, and every bit as well. Both bring in lots of facts, and both weave page turning action into their stories well. But I have to say that Pye has a better feel for real people than Crichton. As much as I've enjoyed Crchton's books, he always makes his characters "tops in their field" or some kind amazing and unreal people. Pye catches a real feel for Americana. As to Bigfoot/Sasquatch, Pye knows as much as anyone about them, and he brings that into the story seamlessly and entertainingly. I had a really enjoyable time reading this story. I'd give it at least 4 stars out of 5. I look forward to his next book, and I hope it isn't long in coming.

I loved this book. The story is awesome and the characters very well defined. You feel like watching a movie while reading it. Lots of action but with some good introspection as well. The depiction of "Big", the bigfoot is not that of a creepy monster. It is showed as a different kind of human who lives a different kind of life.
All bigfooters will enjoy it for sure.

(reviewed 4 days after purchase)
alex freed reviewed on Jan. 24, 2012
(no rating)
I absolutely love this book, I couldn't put it down, Bigfoots are my favorite creatures!! This is the most fascinating subject and I highly reccomend anything that Lloyd Pye has written on the subject whether fiction or non fiction, I have all his books!! Will read it to my son next, he is 8 and will love it!! Keep up the excellent work Mr Pye, we love you!! Ps. any chance of a sequel, can Marci go and stay with Big and his family???

This seems to be the only ebook like this in the entire world. Anyone interested in the subject of Bigfoot definitely must read this. The way Mr. Pye ties Bigfoot facts into his story is very interesting, and with surprises waiting around every page, it makes for a very riveting story!

You have subscribed to alerts for Lloyd Pye.

You have been added to Lloyd Pye's favorite list.

You can also sign-up to receive email notifications whenever Lloyd Pye releases a new book.