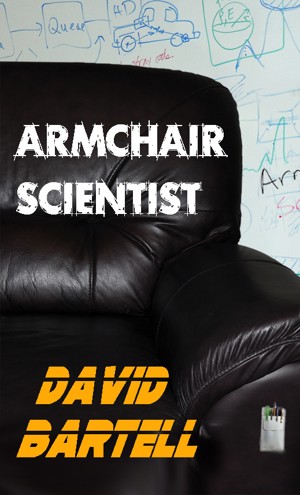 By David Bartell
You have submitted a half-baked theory to the premium magazine Armchair Scientist. This is the terse response.

David Bartell is an award-winning science fiction author, futurist, and member of SFWA. He has sold numerous stories to professional magazines and anthologies. In 2011, he appeared in the Discovery Channel "Curiosity" episode, "Alien Invasion: Are We Ready?" with Michelle Rodriguez, Michio Kaku and others. The UK title was "When Aliens Attack". In 2012 he appeared in National Geographic's "Evacuate Earth", and its 2013-2014 spin-off "How to Survive the End of the World", for which he also consulted.

His latest story takes place in Larry Niven's Known Space universe, in the anthology MAN-KZIN WARS XIII. If you are a fan of Niven, kzinti, or stasis boxes, check out "Zeno's Roulette".

David has a degree in astrophysics, a masters certificate in project management, and is a manager in the high tech industry near Washington, D.C. He is a world traveler, scuba divemaster and father.

You have subscribed to alerts for David Bartell.

You have been added to David Bartell's favorite list.

You can also sign-up to receive email notifications whenever David Bartell releases a new book.