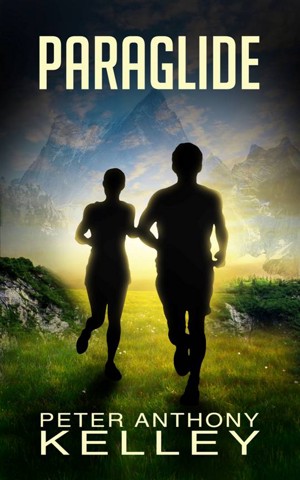 Peter is the author of the young-adult novel, Paraglide. He lives in Minneapolis with his wife, two daughters and a cranky nineteen-year old cat named Brownie. He graduated from American University with a Master's degree in International Relations. When he's not writing he loves travel, biking and watching soccer.

Paraglide is about a boy, Jim Winters (age 15) and his sister Erica (age 9) that are trying to find their missing father in 6 days, because their mother gets kidnapped while they are on vacation in England. The bad guys believe Jim's father has stolen some jewels, and they want them back in exchange for Mrs. Winters. I gave this book 3 stars, and found it likable, more for the 10-14 age group. I had a hard time finding it believeable, maybe because I've never met a 9 yr old as smart as what Erica seemed to be. The kids caught on to clues pretty quickly, as well as escaped captors and goons better than most adults would ever be able to. Paraglide was a fun, light read, taking you on a journey across Europe, and I found it well written, if not a little more juvenile than what I'm used to.

Paraglide was truly intriguing and engaging from the very beginning. I was still left breathless even after everything has ended and definitely looking forward to another adventure with Jim and Erica if there's any. This book is recommended to fans of Enid Blyton like myself and fans of middle-grade/YA contemporary thriller that even adult can enjoy.

(reviewed 57 days after purchase)
Jim Sharp reviewed on March 14, 2012
(no rating)
Jim Winters and his young sister Erica left for England with their mother Genevieve to visit Genevieve's 2nd cousin Abbey. Edward Winters, the father, is an elusive character most of the book having separated from the family approximately a year before the visit to England. Jim, age 15 years, is a somewhat rebellious adolescent who doesn't want to follow in his father's footsteps working for the government. He instead has aspirations of being a chef. Little sister Erica, 9 years, is a "typical" younger sister sometimes bugging her older brother with word games.
Genevieve is kidnapped by the bad guys as soon as they arrive in England. One of Edward's friends shows up at times to help Jim and Erica to find their mother although they are separated from Lionel who is not much help.
They start searching for Genevieve. They end up in Tuscany, Venice and Switzerland evading bad guys. Reena is a young girl who helps since she had met the Dad, Edward. Reena teaches them how to find truffles. Her mother is a cook sharing some of her food and recipes with Jim.
Lots of twists and turns until the end.
I enjoyed the story and the characters and will introduce the book to some of my grandchildren.

You have subscribed to alerts for Peter Anthony Kelley.

You have been added to Peter Anthony Kelley's favorite list.

You can also sign-up to receive email notifications whenever Peter Anthony Kelley releases a new book.