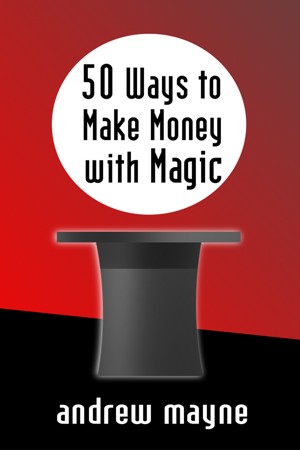 50 Ways to Make Money with Magic

By Andrew Mayne
Andrew Mayne presents a thought-provoking book filled with 50 different ways to use your magic skills and enthusiasm to make money. Whether you’re a beginner or a pro, there’s useful information for you that can help you think about different ways in which you can make magic pay.
Available ebook formats: epub mobi pdf rtf lrf pdb txt html
First 20% Sample: epub mobi (Kindle) lrf more Online Reader
pdb
Price: $4.99 USD
Buy Add to Library Give as a Gift
How gifting works
Create Widget
Tags: magic business magician
About Andrew Mayne

He's made ghosts appear on the screens of borrowed cell phones. He can shove his hand through a living human's chest, seemingly breaking the skin yet leaving them unscathed. He's even made a town think they were being besieged by UFOs.

He's a magician, a paranormal illusionist, an inventor and an unapologetic prankster. He's been one of magic's best kept secret. Andrew Mayne started off on a promising career in magic as a teenager when he became the second youngest illusionist to ever embark on a world tour (The first one being another upstart by the name of David Copperfield). During his tour he performed in resorts, on luxury liners and exotic locales around the world. Five years later, at the ripe old age of twenty-three, he decided it was time for a career change. Bored with putting beautiful girls into boxes only to be cut in half, the sequins and the other clichéd trappings of magic, Andrew decided to call it quits on anything that was beginning to look like a normal career in magic. Although an established performer at the top of his career, there wasn't a place for the kind of magic Andrew really wanted to perform. To his booking agent's chagrin, he decided to delve behind the scenes and see what kind of boundaries he could push.

At first through word of mouth, then through books and DVDs, Andrew's unique ideas began to spread throughout the magic community. David Blaine, Penn & Teller and others all sought out Andrew for his radical ideas on magic. He became know as a magician's magician. From figuring out the right way to levitate on a crowded street, to inventing a means for an astronaut in space to choose the same card as a magician on earth, Andrew became the go-to-guy for the impossible. His creations began popping up on television specials and stages around the world. Aspiring young magicians who dubbed themselves "Mayniacs" devoured his material and began inflicting Andrew's style of shock magic on an unsuspecting public. People around the world were being exposed to Andrew's wicked approach to magic.

Today, with over 36 published books, DVDs and effects, Andrew is widely considered one of the most creative magicians of his generation. Unique for a magician, besides being both a creator and a performer, his creative repertoire stretches from both intimate close-up magic to grand illusion. In 2007 Andrew launched iTricks.com the top daily news source for magic and iTricks.TV, a daily magic video channel. Beyond magic, he's a partner in Jaras/Mayne Productions which recently produced G4 Underground for the G4 network.

You have subscribed to alerts for Andrew Mayne.

You have been added to Andrew Mayne's favorite list.

You can also sign-up to receive email notifications whenever Andrew Mayne releases a new book.