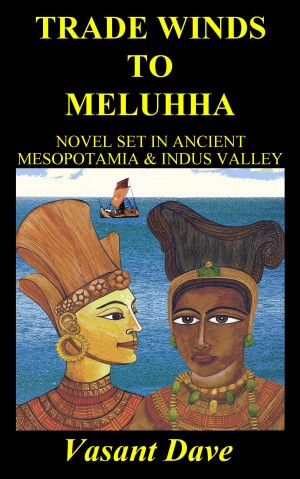 Rated 3.00/5 based on 1 review
Recounts young Samasin's adventure in Bronze Age Mesopotamia & Indus Valley Civilization. Implicated in murder, Sam flees to Meluhha to search Siwa Saqra – name uttered by the dying man. Meeting Siwa, he finds that the murder in Babylon held an enigma. More
Samasin, an orphaned stable boy, rushes to help a foreigner sprawled with a slashed neck in a deserted tavern in Babylon. Gasping for the last breath, the stranger presses a fish-hook in his palm and pleads, 'Give to Siwa Saqra.' Just then, some hoodlums charge in and accuse the bewildered youngster of the murder. Sam must identify the assassin to clear his name from the stigma, and the man mentioned by the dying Meluhhan could probably help. But first he has to escape from the death sentence passed by the owlish elders of Babylon.

Sam flees under the darkness of night, and shivering violently, swims to a ship setting sail for Meluhha. During his countrywide search for Siwa, he runs into dacoits, mendicants, lunatics, thugs and even shamans, all bent on taking his life. However, it never occurs to the naïve stable boy that a powerful foe wants to sabotage his mission.

At last when Sam reaches Siwa, the man's haughty daughter instantly takes a dislike for him seemingly because he hails from Mesopotamia. Nevertheless, her slim dark form and a prolific braid swaying gently upon her derrière steal his heart. With a discreet eye on the girl as she hovers in the background, he sees Siwa blankly staring at the fish-hook. Sam's jaw drops as he wonders, 'Could it be somebody else to whom the dead man actually intended to convey the message?'

Vasant Davé was born in East Africa where his parents had migrated from India before WWII. He was schooled in Kenya when it had just attained freedom from the British rule. Although English is not his mother tongue, he could learn it fairly well with the help of two very dedicated British teachers, Ms. H. C. Davies and Mr. A. Bullock.

Vasant studied science in Elphinstone College and graduated as an electrical engineer from the University of Bombay. Besides providing Industrial Market Research services in India, he catered to corporate clients in Australia, China, Germany, Hong Kong, Israel, Singapore, the UK and the USA. His work called for extensive traveling throughout India. It helped him to address a deep interest in archaeology by visiting numerous ancient sites.

During one of his frequent tours he happened to visit Lothal in Western India, and was awed to learn that it was a sea-port that conducted maritime business with Mesopotamia. Subsequently he visited other Indus Valley archaeological sites and had had discussions with authorities on the subject. Studying Mesopotamia, he found that 4,000 years ago women were more emancipated than their great great grand-daughters are today in what is now the Middle East. Gradually, a rough plot started emerging in his mind revolving around trade and cultural links between two of the most ancient civilizations in the world. After retirement in 2008, he took up writing 'Trade winds to Meluhha' and completed it three years later.

Earlier, Vasant's anecdotes and articles were published in 'Readers' Digest', 'Economic Times', 'Business India', 'Shankar's Weekly', 'Telematics India' and 'Studio Systems'. His technical background helped him to understand and apply historical, geographical, environmental and cultural nuances bearing upon the life during the Bronze Age, the period in which 'Trade winds to Meluhha' is set.

From the start of the novel the hook is a murder, after which events take you travelling through modern-day Iraq to Pakistan via Oman/Bahrain. This novel just oozes the amount of time spent in research and presents a thoughtful approach to the lives and times mentioned. Information about everything from the sealed clay tablets used for communication, the description about the bead manufacturing process are authentic and, educate us about the different tools and crafts widely used at the time.

The characters, and there is a large cast of characters in this book, are very well written and actually based on research in the time period covered by the novel. But, while being believable, they became a little muted at times. The Sumerian language that they speak has been found in cuneiform script, again an indication of how much research this Author conducted.

However, despite the start of the story being very interesting, with readers becoming involved in exploring the new world around them along with what’s happening, the narrative becomes very difficult to follow as it wanders from one city to another and the cast of characters keep changing. In one portion of the novel the Author uses a language which doesn't appear to be authentic to the setting in which it is used.

After the promising start that this novel had, it takes a slight turn and commences on what can only be described as a hilly ride. It picks up, and completely gains your interest again, only to drop down a few pages later. All this culminates in an ending which, after reading the rest of the novel, seems a little bit rushed and far too convenient for me, with all loose ends being tied up nicely.

In the edition I read there was a chapter “How This Prehistoric Novel Was Written” at the end. I feel this may have been better placed at the beginning of the novel, as its explanation of places, location, and names, with respect to our modern day geography, may help future readers to appreciate the writing more. Also in the Kindle edition, the pages are full of hyperlinks to this information, and I found that to be a little annoying; if I hit one in error to have my page suddenly change to something else.

This novel is a mix of fiction and non-fiction, with a definite and obvious lack of vulgarity and violence which I didn't find believable given the time period. It is not a fast paced novel as one would expect in a murder, and it didn't evoke the emotions it could have, given the location and topics covered.

I applaud the intensive research the Author did when putting this sweeping novel together and also the way he successfully integrated fiction and non-fiction. However, when it came to the bottom line, unfortunately it didn't deliver for me. I would recommend this to other lovers of the historical genre, so they can read something a little bit different from the usual offerings.

You have subscribed to alerts for Vasant Dav&eacute;.

You have been added to Vasant Dav&eacute;'s favorite list.

You can also sign-up to receive email notifications whenever Vasant Dav&eacute; releases a new book.