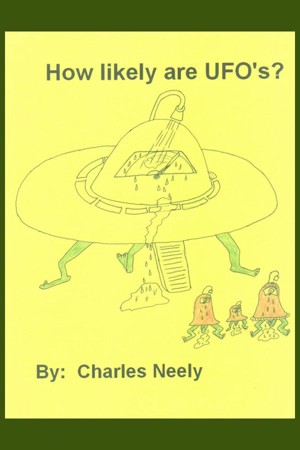 How Likely are UFO's?

By Charles Neely
Rated 4.50/5 based on 2 reviews
A whimsical and lightly written chronicle of UFO history and a great deal of conjecture about who they are and where they came from. A view is advanced that tackles two of the most troubling aspects of UFOs: Winking in and out of existence and the high speed right angle turns.

I give it 4 stars. I learned from it. Mostly I learned that I do not agree with modern physics regarding basic reality. Neely, the author writes, “Quantum Mechanics formulae have resulted in scientists coming to believe that more than three spatial dimensions are required to explain reality as we thought we knew it.” I am a student of Kant, and a disciple. I believe that space in itself is nothing. It is an idea that we have, and it is therefore something which we can examine, but its only objectivity is that it conditions our rudimentary sense data so that the mind can be affected by it. Space is not something out there. It is in us first of all, and the objects out there that are in space are productions of the mind, blown up like a balloon by imagination and conceptual thought from or out of the rudimentary sense data that affects it, blown up like a balloon in the nothingness of thought to be our world, and this rudimentary sense data that our actual, real experience is based on is not in itself anywhere. Because it is in us first of all, we know space a-priori. We are immediately familiar with space, and we know all that there is to know about it perfectly well. Thus, we know that space has three dimensions; and we know this much better than we (or any experts) know anything about atomic particles. That is what I believe. Regarding flying saucers, there is compelling evidence in that people have seen them at the same time and in the same place as they have been detected by radar as being, regarding where and when. That is hard to discount. Something must be there. Yet their movements defy what we know about the objects that we experience. The right-angled turns at 2,500 miles per hour, for example, are impossible; also, traveling through the atmosphere at such tremendous speed would make them extremely hot from friction. Neely suggests that these contradictions with our scientific knowledge might possibly be explained by the fact that space has more than 3 dimensions. Well, if you believe, as I do, that space only has 3 dimensions, then there is no possible explanation for the movement of these observed entities. Therefore they are not real objects in the world, the good evidence of their being observed simultaneously both by sight and radar notwithstanding. That is my present position. They are not part of our world. Whatever they are, they are not real things. Do they exist? I hope not. I do not want to believe in ghosts, or in other occult stuff. At present, thank heavens, I don’t.

The author supplies some very compelling documentations that all will want to read. Easy and interesting reading.

You have subscribed to alerts for Charles Neely.

You have been added to Charles Neely's favorite list.

You can also sign-up to receive email notifications whenever Charles Neely releases a new book.