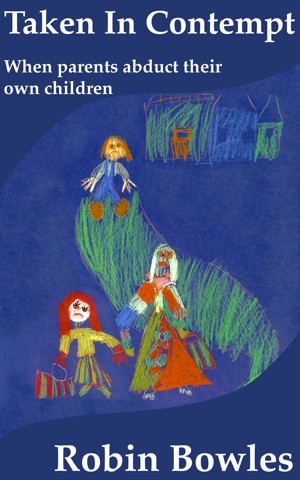 By Robin Bowles
Now in its 3rd edition this world authority on International Parental Child Abduction by Robin Bowles crosses borders and boundaries that have not previously been explored.
Imagine returning to your home one day to find your partner had disappeared with your child or children. This happens all too often. It tells parents' gripping stories of loss, heart-break and danger as they try to find them. More
The vanishing of English 3-year-old Madeleine McCann in Portugal and the search on a push-bike around Europe by Australian father Ken Thompson, who successfully found his son Andrew in Amsterdam 3 years after after he was abducted by his mother when 3 years old, both highlight the incidence of missing children across international borders. There are thousands more stories like Madeleine's and Andrew's, very few with happy endings.

Astonishingly, thousands of parents abduct their OWN children every day, to hide them from the parent they leave behind. Taken in Contempt (3rd Ed.) impartially tells the stories that describe the heartbreak and danger and chronicle the incredible courage and risks people take in the name of love. Author Robin Bowles has first hand knowledge of IPCA. In 1999 her own grandson was taken to the other side of the world.

Recommended as 'A book that needed to be written' by a Chief Justice of the Family Court, this book fearlessly explores all aspects of this modern dilemma. It's moving, engrossing and totally compelling.

In 1996 Robin read a newspaper report about the alleged suicide of Victorian country housewife Jennifer Tanner. Guessing there might be a book in the ‘story behind the news’, she closed her PR business for a year and wrote a best seller, Blind Justice, now in its eighth reprint. She has written a bestseller almost every year since. During her career as an investigative writer she also obtained a private investigator’s licence. Some of the cases she was involved in inspired her novels, The Curse of the Golden Yo-Yo and Mystery of the Missing Masterpiece. Widely recognised as Australia’s foremost true crime writer, Robin is also a national convenor of Sisters in Crime Australia.
‘Robin Bowles relentless investigation, including over 50 hours spent interviewing Bradley Murdoch, reveals not only the complexities of a case investigated over thousands of kilometres, but realities of people and places which are almost alien to those of us who hug the green shores around the dead centre and populate that landscape with our deepest fears and worst imaginings,’ Katrina Beard presenting the Davitt Award for true crime to Dead Centre, 2006.

You have subscribed to alerts for Robin Bowles.

You have been added to Robin Bowles's favorite list.

You can also sign-up to receive email notifications whenever Robin Bowles releases a new book.