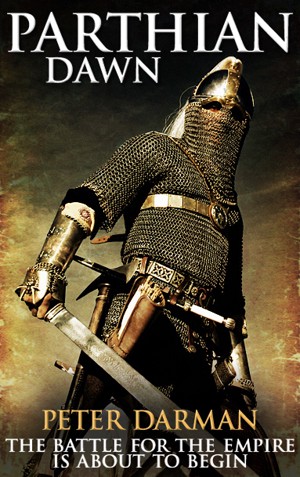 By Peter Darman
‘Parthian Dawn’ is the second volume of the adventures of Pacorus the Parthian and his companions – the fierce and proud Gallia, the ex-Roman centurion Domitus, the scout Byrd and the sorceress Dobbai – as they battle for their lives against the backdrop of the clash between the ancient world's two greatest empires.
'Parthian Dawn' follows on from 'The Parthian'. More
After three years fighting by the side of Spartacus, Pacorus and his followers have escaped from Italy in the aftermath of the defeat of the slave rebellion. Made a king by the ruler of the Parthian Empire on his return, he has married his beloved Gallia and made the city of Dura Europos on the banks of the Euphrates his home. But his new kingdom is seething with discontent and surrounded by hostile desert nomads who are the sworn enemies of the Parthians. The aged King of Kings, the man who has united the Parthians for decades, then dies to cast a shadow of uncertainty over the empire, which erupts into full-scale civil war as one of the empire’s most powerful men, Narses, attempts to seize the high crown by force.
Pacorus is forced to fight both Narses and his scheming ally, Prince Mithridates, to preserve the realm and his own crown. And then the Romans, taking advantage of Parthia’s internal troubles, launch their own invasion of the empire. Will Pacorus and indeed the Parthian Empire survive the conflict that engulfs them on all sides?

I was raised in Grantham, Lincolnshire and attended the King's Grammar School after passing the Eleven Plus exam. In the latter I clearly remember writing an essay on Oliver Cromwell – my first piece of military writing.

Then came a BA in history and international relations at Nottingham followed by a Master of Philosophy course at the University of York. The subject was the generalship and cavalry of Prince Rupert of the Rhine, my boyhood hero, during the English Civil War. The year I spent researching and writing at York, Oxford and at the British Library in London was a truly wonderful time.
I moved to London and eventually joined a small publishing company as an editor. Thus began my writing career. I now live in Lincolnshire with my wife Karen.

Also in Series: The Parthian Chronicles

You have subscribed to alerts for Peter Darman.

You have been added to Peter Darman's favorite list.

You can also sign-up to receive email notifications whenever Peter Darman releases a new book.