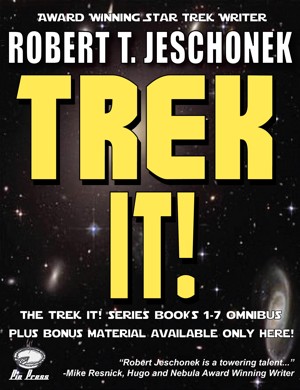 "Robert Jeschonek is the literary love child of Tim Burton and Neil Gaiman—his fiction is cutting edge, original, and pulsing with dark and fantastical life. His stories suck me in and refuse to let me go until the last page…" – Adrian Phoenix, critically acclaimed author of The Maker's Song series and Black Dust Mambo

Award-winning science fiction author Robert T. Jeschonek has written Star Trek and Doctor Who fiction and futuristic stories for books, magazines, websites, and podcasts around the world. He won the national grand prize in the Star Trek: Strange New Worlds writing contest from Pocket Books. He is one of a handful of authors chosen to write stories in the Star Trek: New Frontier universe. DC Comics, Simon & Schuster, and DAW Books have published his work. He was nominated for the British Fantasy Award for his story, "Fear of Rain." His young adult urban fantasy novel, My Favorite Band Does Not Exist, is now available from Clarion Books/Houghton Mifflin Harcourt and was named one of Booklist’s Top Ten First Novels for Youth. Visit him online at www.thefictioneer.com.