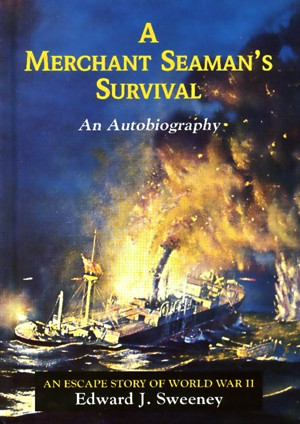 “On 20th August 1940, I was a 20 year old member of the gun crew of the refrigerated cargo vessel, the SS Turakina. We were sailing from Australia to New Zealand when attacked by a German raider, Orion. She was disguised as a Japanese vessel, the Tokyo Maru, because German ships had not attacked so far south before.

After continuous bombardment, and an uneven battle firing my single 4.7" gun, we were torpedoed, shelled and soon ablaze. 19 members of our crew of 57 were rescued by the Orion, the remainder killed.

Our attackers praised our courage for fighting against overwhelming odds, but considered us mad English. I was rescued by our attackers who continued to sink other allied ships while I was locked below decks.

Eight months later, after being imprisoned on another German ship, the Altmark, we safely docked in Bordeaux, France. I had no belongings, as everything went down with the ship.
Imprisonment in a transit camp, was followed by being put on a German troop train, taking us to a labour camp. Armed guards were in our carriage – but I escaped by diving from the train 20 miles from Paris, in occupied France.

After hair-raising experiences, I was re-captured and imprisoned – but escaped from a concentration camp in Argeles Sur Mer, Southern France.

I crossed the Pyranees into Spain on foot. But was arrested again and jailed by Franco’s Civil Guard for not having papers to prove my identity.

After a spell in filthy jails, I was imprisoned again. This was the notorious labour concentration camp at Miranda de Ebro, in Northern Spain. I had to help build a new major road, and carry a large basket of heavy stones on my back.

Fifteen months after my leaving England, I was mysteriously released.

Gibraltar was left for Glasgow. I was none the worse for my adventures. Apart from a newly shaven head just before we left, I was quite fit, and glad to be back home in familiar normal surroundings, one of only two merchant seamen ever to escape from Occupied France.” - Edward J. Sweeney

After his World War 2 escapes, Edward Sweeney met and married Betty. During many years of happy marriage they raised 3 children Allan, Barbara and Ray. Edward became a successful businessman with his company Grange Flooring, which did contracts for many councils, hospitals, schools, etc.. Before his wife died, they enjoyed round the world cruises and trips to his birthplace in Melbourne, Australia. Despite living in England for most of his life, Australia was always his home.

Edward Sweeney's 70th Anniversary of ship sinking in WW2
20th Aug 2010 was 70th anniversary of sinking of SS Turakina in Tasman Sea. This led to Edward Sweeney being imprisoned on the German ship as it sunk other Allied ships, escaping from various prisons in Occupied France, escaping from two concentration camps, diving out of a German troop train on the way to a German labour camp, and walking across the Pyranees to Spain where he was captured again.

Reviews of A Merchant Seaman's Survival - An Autobiography - An Escape Story of World War II by Edward J. Sweeney

You have subscribed to alerts for Edward J. Sweeney.

You have been added to Edward J. Sweeney's favorite list.

You can also sign-up to receive email notifications whenever Edward J. Sweeney releases a new book.