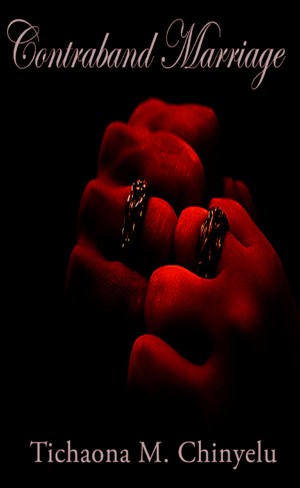 Tichaona Chinyelu is a poet and author of In The Whirlwind, Still Living on My Feet & Contraband Marriage. She has conducted many interviews which include Artist First and LTH Weekly Show. Tichaona's poem Weaver Woman is featured on the main page online at Black Poetry. She is the CEO of Whirlwind Publishing. For further information visit http://tichaonachinyelu.com or contact her at whirlwindpub@gmail.com

"Unofficially contraband
Like weeds that dare to subvert
Concrete
Loving him, marrying him
Prisoner,
Felon,
Gangster,
Thug
Was something
That wasn't supposed to happen" ~ "Contraband Marriage"

Contraband Marriage digested as a complete treatise is an exquisitely tender collection of material when juxtaposed against the writing I originally encountered of Tichanona Chinyelu. Those first experiences with her work were conceptually jarring. Her words moved in the manner of serrated blade edges drawing nary a punch when slicing towards the meat of matters both personal and political. The physical and emotional landscape she evokes is a drastic contrast of dystopic futurism and afro-diasporic classicism. I would often need to separate my reading of her work with lengthy periods of reorientation returning later for a consolidated review of any new material.

This manuscript differed from that period both in style and substance. I was able to complete the text in a span of two days. Those two days were filled with a range of emotional experiences including the frustration of co-parenting, relational indifference and somber post-rupture nostalgia also known as the break up blues. As I sat down to write this review, I stopped myself at the outset contemplating whether I had breezed through the text too briskly. Then I decided that I should go back and reread the entire collection again concerned that I might overlook some jewel or not merit the full attention necessary for each verse. Nearly 30 days after having finished my second pass at a far more patient pace, I returned to consider again this review and the insightful critique of marriage and relationships offered within its pages.

In a distant past, I considered myself anti-institutional and refused to honor the societal ideal of marriage. Any definition that involved rings and ceremonies was socially constructed to enforce a conformity to which I refused to subscribe. Some years later I was struck with an intense yearning to submit to an institution that I then thought helped reinforce long term commitments when both people announced their intention before a communal body who would then hold them to that pledge. Today as I stand a little bit older, wiser and more aware of how my choices affect my child and others around me, I live somewhere in the middle of those two polarities. Marriage is an institution in dire need of modern reform, but we must all and each of us find a way to create lasting commitments to one another which strengthen the ideals of community, family and nation.

Chinyelu's text engages an evolutionary pathway displaying tiny milestones throughout which detail how she discovered herself as a lover, wife, mother, woman and daughter. While initially an artistic journey channeling social critique of institutionalized marriage, the book also succeeds as a socio-political critique of imprisonment and criminalized bodies as Chinyelu charts her growing love for an inmate of one of America's rapidly accumulating correctional facilities.

In "Vienna", the author reaches into ancestral memory to contemplate the how those who battled against circumstance to complete the Great Migration might view their great grandchildren in the era of the prison industrial complex. The title piece elucidates the dull and abiding heartache involved in maintaining a love for someone which inspires her to "subvert concrete walls / barbed wire fences / laws that change on Sundays" until finally they are afforded the minor victory of a prison marriage kiss. In the back of the reader's mind, one imagines it a victory short lived as the newly wedded husband is distanced from his wife once again by those same concrete walls and barbed wire fences.

Chinyelu divides each part of the book into subsections outlining for us those first inklings of her contraband affair which find us wading first through "The Murky Matter" where she wrestles with lessons of intimacy learned by loving both inside and outside of the walls of the prison even touching briefly upon the loneliness that might seek to draw her outside of the bounds of fidelity. "Mutterings to Myself" finds our first experience of the fractures forming within the relationship between the author and her muse as she wonders aloud if it is his prison experience or his own embattled personality which she is loving against.

In "...then comes science", we find the relationship has reached critical mass resulting in one of the most poignant remarks on the internal oppressive dynamic of marriage to be found within the text which arrives by way of the selection "Noose on my finger" declaring "We play tug of war with it / I take it off / You put it back on. / We go back and forth / until my finger is bruised and battered. / I tell you / with my hand in this condition / I can't write / You smile". The subsection ends with her eventual escape from the marital institution with a new child in tow who becomes the birth of a new subsection entitled "the small axe" which opens with the magnificent act of reparation entitled "To the Father of My Son". This selection echoes with the weary nostalgia of a relationship lost and their shared connection in the birth of a child ending with an olive branch which beckons "I still remember the love / that made me want you as the father of my child / and I hope that wherever life takes you / you find the peace you're looking for / and I hope it opens the doors of your mind / so sankara can have another place he can walk into".

Contraband Marriage closes with Chinyelu consummating her internal self discovery at the end of this stage of her journey leading a series of mantras to call us beyond our fears and contradictions in "The Grace of a Decision" that chanting that "We can be heavy with gravity / - too overloaded with circuitry to pay attention to heart - / Doomed to die instead of do." This is the substance of her assembled wisdom on a very specific type of love and marriage which she experienced. This granular specificity does not negate its application to a wider conversation about marriage in its societal contexts. Can a society that would seek to so wholly circumscribe the acts of bodies of black people from loving, living or learning in the context of prison really be the arbiter or keeper of such a sacred institution or should we find a way to define those boundaries for ourselves? Can we come up with a definition of marriage that makes sense to us though it may be entirely contraband and abnormal to society at large?

You have subscribed to alerts for Tichaona Chinyelu.

You have been added to Tichaona Chinyelu's favorite list.

You can also sign-up to receive email notifications whenever Tichaona Chinyelu releases a new book.